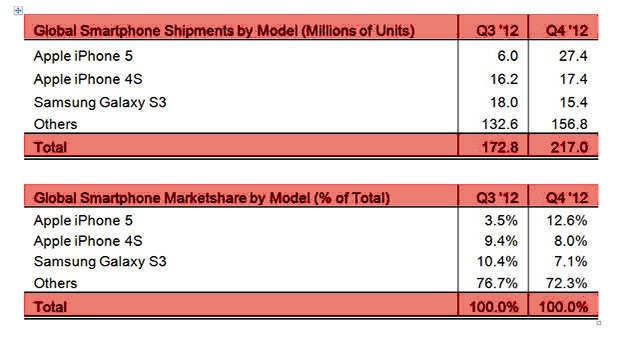 And here’s a company which finds success in defeats too. Apple, the manufacturer which is currently getting a bit unpopular among hardcore smartphone users nowadays is seeing its two iPhone models, the iPhone 5 and 4S become the most sold Smartphones in the last quarter of 2012. Both the phones captured 12.6 and 8 percent market-shares respectively. That’s more than Samsung’s Galaxy S III flagship which scored 7.1 percent market share in the same quarter.

These were, infact, the numbers which were achieved by the predecessors of these smartphones over a time period of a lot of months, years even.

The sales of the Samsung smartphone may have been down due to the ever-increasing rumours surrounding its next flagship which will most-probably be revealed next month. It’s interesting to see that more than a year old iPhone 4S earned a high market-share too, despite being ridiculed in its first few months.

The success can be attributed to the fact that its price has dropped quite much since its launch and also because of it getting the latest iOS 6 update just like its predecessors about time as well.

The success of the iPhone 5 wasn’t any surprise though as 5 million units was the number of iPhone 5s sold by Apple in the launching weekend. It will be interesting too see however, which way this number will go in the coming months with the launch of the Samsung Galaxy S IV, among other smartphones.