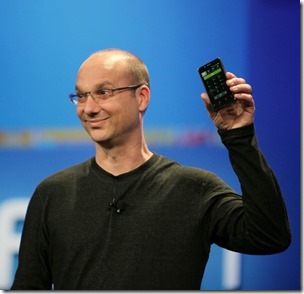 Andy Rubin, the guy in charge of Google’s Android operating system will finally step down from his post after a long, fruitful period of 8 years. He will be replaced by Sundar Pichai who has already worked on the Chrome browser and Chrome OS among several other things.

Rubin is the person behind the enormous success of the biggest smartphone operating system on the planet and has worked with a number of tech giants including Apple and Carl Zeiss.

The announcement was made by Google CEO Larry Page in the official Google Blog. "Sergey and I first heard about Android back in 2004", Page writes, "when Andy Rubin came to visit us at Google. He believed that aligning standards around an open-source operating system would drive innovation across the mobile industry. Most people thought he was nuts. But his insight immediately struck a chord because at the time it was extremely painful developing services for mobile devices".

He isn’t going out of the picture though. "Having exceeded even the crazy ambitious goals we dreamed of for Android — and with a really strong leadership team in place — Andy’s decided it’s time to hand over the reins and start a new chapter at Google. Andy, more moonshots please!" Page is obviously hinting at a new position for Rubin in the future.

Android was founded by Rubin and his 2 other colleagues in 2003. It encountered a series of financial troubles until Google bought it in 2005, bringing Rubin to Google. Success came quickly without breaking records. Praises starting coming by the end of the last decade as Google started the use of new technologies in their phones and also with the launch of their own ‘Nexus’ phones. As of now, 750 million devices run Android worldwide and 25 billion apps have been downloaded from the Play Store – the Android Market Place – so far.

Moving forward Larry Page is optimistic about the new chief of the Android department. "Going forward, Sundar Pichai will lead Android, in addition to his existing work with Chrome and Apps." Page writes. "Sundar has a talent for creating products that are technically excellent yet easy to use—and he loves a big bet. Take Chrome, for example. In 2008, people asked whether the world really needed another browser. Today Chrome has hundreds of millions of happy users and is growing fast thanks to its speed, simplicity and security. So while Andy’s a really hard act to follow, I know Sundar will do a tremendous job doubling down on Android as we work to push the ecosystem forward."

One thing which has always been a characteristic of Rubin’s work is his innovation and taste. Now that he has left Android, it will be interesting to see which way he will go from now onwards and what wonders will he be able to achieve from there.