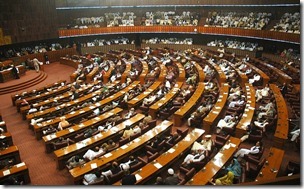 The National Telecom Corporation (NTC), that provides internet and telephony services to government institutes and parliamentarians for their offices and official residences, has issued list of 284 currently sitting senators and ministers from now dissolved parliament who have failed to clear their dues for internet and telephone services.

NTC said that a total of 449 operational telephone numbers and internet connections were unpaid and are placed in the defaulting category valuing a total amount of Rs. Rs 9.56 million.

NTC said that defaulting parliamentarians with more than Rs. 10,000 dues include:

Election commission of Pakistan said that it can disqualify any nomination for next election if there any pending dues on the applicants amounting to more than Rs. 10,000.