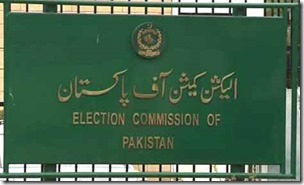 Election Commission of Pakistan is lately struggling with its website. During weekends it was targeted by hackers and website was put offline to make sure that hackers don’t harm their data – so innocent of ECP – and now they are snipping in and out due to traffic load they are getting on their website.

For those who aren’t familiar with the background, Election Commission of Pakistan was to put online the list of nominated candidates for next general elections on their website. This moment was caught by hackers who defaced the ECP website to earn some fame.

Later on, we were told that ECP website is moved to more secure location with ultra-high resources to meet the requirements.

However, on Monday, the website went offline due to the traffic it was getting. ECP said that access to its website was blocked by PTCL due to extremely high traffic. PTCL denied this and said that it neither hosts ECP websites nor it blocked the access to website.

This is probably first time in the history of ECP that they are getting few thousand hits from those who are interested to download the list of nominated candidates, and look what’s happening with them.

Its a shame that a government body is struggling this way in accommodating the traffic they are getting, especially when budgets are unlimited and resources available to them are countless.

Just to mention, they aren’t alone in mismanaging the traffic loads. Almost every education board struggles on results’ day and students are left with no option but to wait for hours (and at times for days) to get their results.

These days when servers, bandwidths and DDoS mitigation solutions are sold for pennies, a website getting down due to traffic load is a shame. Its about time that ECP (and all other government bodies) should employ competent and able staff to manage their websites to make sure that they don’t go offline just because of traffic loads.

It merits mentioning here that there are professionals in Pakistan who manage over 5 million hits per day on a single website, while there are others who can sustain over 10-25 Gbps DDoS attack.