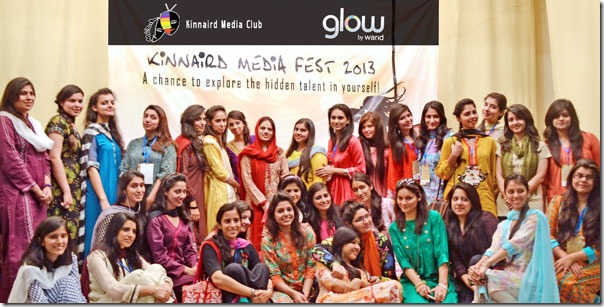 Glow by Warid has said to continued its mission of engaging and enabling the youth of Pakistan by sponsoring the second Media Fest of Kinnaird College for women.

The Media Fest was organized to allow students, aiming to major in media studies, to unleash their talent.

The two day fest was organised by the Kinnaird Media Society. Teams from Punjab University, Government College University, University of Engineering and Technology, FAST, SIMS, Beacon House School and Green School participated in the event. The short films competition was won by UET while Government College took home the winning prize in the print advertisement competition; WWF’s team was declared the runners-up.

Glow by Warid has always strived to provide a platform to Pakistan’s youth through which they can express their talent. Glow by Warid’s support in conducting this Media fest is yet another step towards enabling Pakistan’s youth, which was also appreciated by the Kinnaird Media Society.