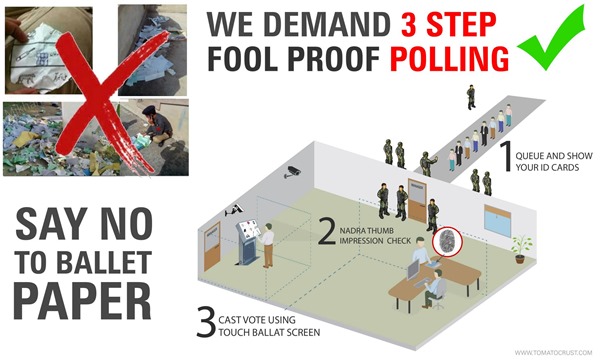 Recently held election in Pakistan saw massive criticism due to various rigging incidents in different constituencies of the country. Observers said that at least 10 percent – or 7,000 – polling stations were reportedly rigged to influence the voters.

Bogus votes, pressurizing voters, in-availability of ballot boxes, papers and various other similar problems were reported in different parts of the country.

Experts – the optimistic ones – are of the view that overall elections went well and there is no way of making election 100 percent fool-proof, especially at this magnitude.

However, Rizwan Zakir, a Pakistani Australian, differs. He believes that voting system can be made flaw-less by leveraging the technological advancements and valuable data that NADRA has gathered so far.

Rizwan claims that an Electronic Voting System (EVS) – if deployed – will be more efficient, productive, cost effective and rigging free as compared to current manual, paper-ballot based voting system in the country.

It merits mentioning here that Indonesia recently tried an E-Voting system as a pilot and received positive reviews.

How Electronic Voting System Will Work?

Very simple: Here would be the process:

EVS at the Back End

At the time of CNIC swapping (of the voter) all the details will be loaded to the server (hosted at polling station), which will then cross-verify the voter with thumb impression. Once voter will be confirmed, the touch screen ballot will get activated automatically. Here voter can go and cast his/her vote by inputting his/her choice.

Input of vote will be directly relayed to ECP servers in real time.

Rizwan said that cross checking of thumb-impression with CNIC data can be completed with-in 5 seconds.

Moreover, touch-sensitive ballot screens will get activated only after verification of voter, and will accept only one vote, hence eliminating any chances of multiple voting or voting on the CNICs of dead people.

Like Election Commission of Pakistan, the electronic voting system should be developed and maintained by non-partisan team. System should be audited by reputable firms and every political party should be taken on-board for the deployment of such system.

Network and machine-level security can be maintained by NADRA through firewalls.