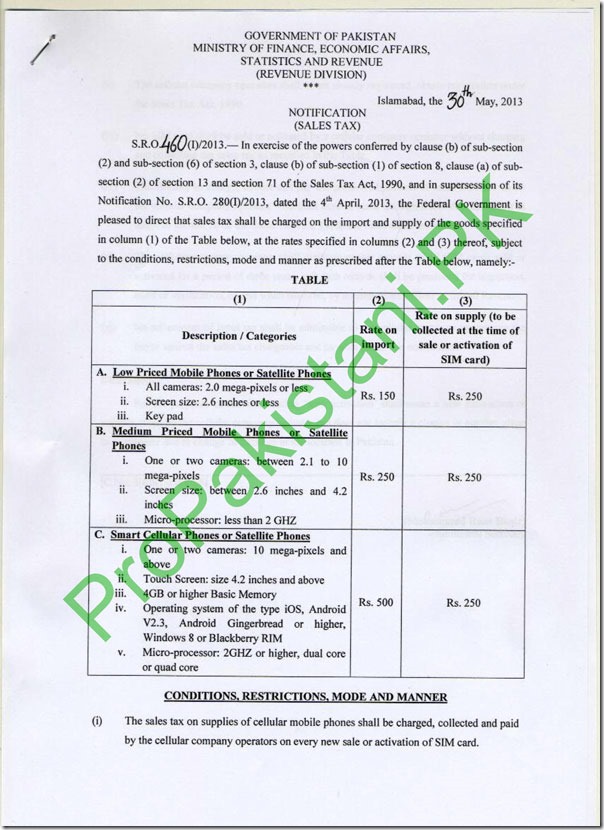 In a surprising move, Federal Board of Revenue (FBR) yesterday issued a notification according to which tax-rates on mobile phones were revised down-wards  — with three slabs — along tax collection at time of sale of each new SIM was re-imposed.

On April 4, the FBR had issued a notification that the tax would be deducted at source from importers of mobile phones and would be passed on to the end consumers. Before April 4th, Rs. 250 were collected from cellular companies as phone-tax at the time of SIM activations.

This new notification, SRO460 of sales tax, issued yesterday said that tax on mobile phones will be collected at two levels, one at source while another tax-collection will be made at the time of sale of each new SIM.

According to the SRO – produced below – Rs. 150 as sales tax is imposed on phones with 2.0 megapixel camera or less and or with the screen-size of 2.6 inches or less.

SRO said that a tax of Rs. 250 will be deducted at source for all dual camera phones (front and rear) of 2.1 to 10 megapixel camera, screen size of 2.6 inches to 4.2 inches or having processors lesser than 2.0 Ghz.

Rs. 500 tax will be deducted at source if phone has cameras of over 10 megapixel resolution, touch-screen with more than 4.2 inches, dual-core or higher processors.

Moreover, Rs. 250 as sales tax will be deducted from mobile phone operators on sale of each new SIM. With this, the activation tax on new SIMs, which was – according to April 4th SRO – transferred to mobile phone imports is now re-applied.

It merits mentioning here that sale of mobile phones were cut by half during April and May 2013 after imposition of tax of Rs. 1,000 and Rs. 500 on mobile phones.

Mobile phone manufacturers were lobbying hard to get this (April 4th SRO) tax reversed, and they got successful as tax collection has gone back to cellular companies (in shape of SIM activation charges) along with a nominal increase of Rs. 150 on low-end phones, the major chunk of mobile phones that are being sold in the market.

A copy of SRO460 of Sales tax – detailing the new tax mechanisms – is produced below: 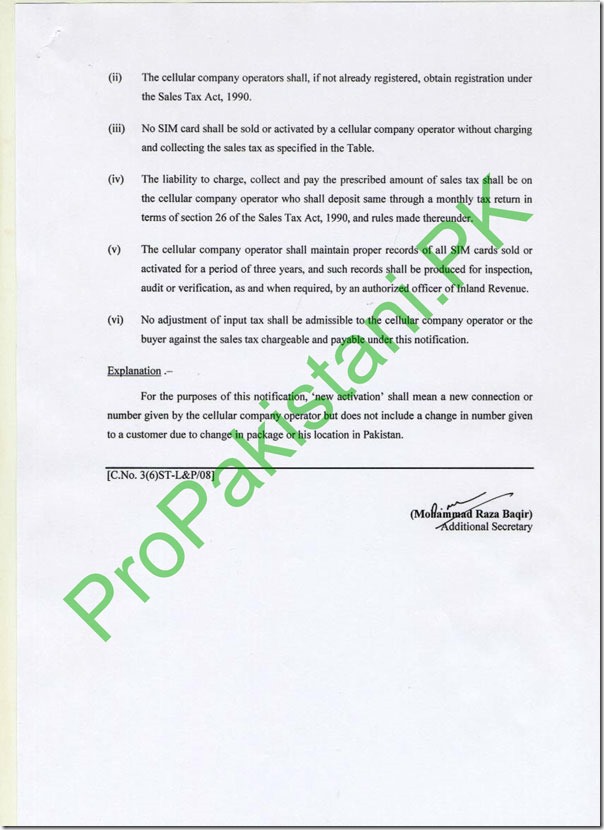