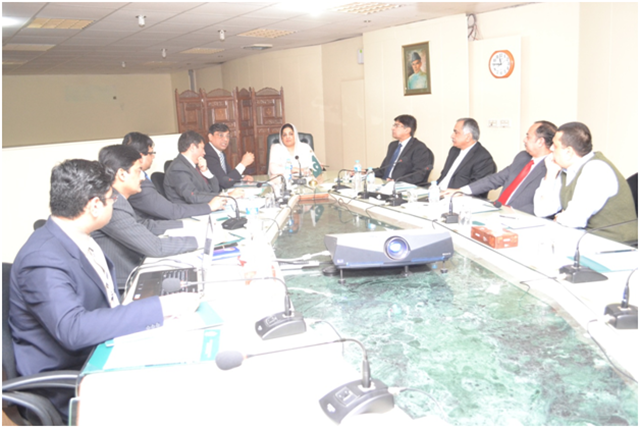 Grey Trafficking should be controlled at the earliest and those allegedly involved must be brought to book.

This was opined by Ms. Anusha Rehman, State Minister for IT & Telecom while chairing a follow up meeting regarding monitoring of Grey Trafficking yesterday.

Mr. Akhlaq A. Tarrar, Secretary IT, Mr. Azmat Ranjha, Additional Secretary IT, Dr. Ismail Shah, Acting Chairman PTA and representatives from law enforcement institutions were also present in the meeting to discuss the counter strategy regarding Grey Trafficking as well as the respective role of all stakeholders.

The State Minister for IT, Ms. Anusha Rehman, who chaired the meeting, acknowledged the very fact that Grey Traffic had started to decrease considerably due to the onerous efforts of PTA and FIA under the umbrella of ministry but stressed on taking measures for its further control at the earliest since it was the need of the hour.

During the meeting the participants were given a detailed briefing regarding the Grey Trafficking whereby it was endorsed by all that there was a dire need of checking this menace.

It was mutually agreed and fully endorsed by all stakeholders that with the help of a comprehensive plan of action there would be a substantial decrease in the quantum of Grey Trafficking in coming four weeks.

Moreover, it was also reiterated that all those culprits who are allegedly involved in the phenomenon, must be brought to book.

It is worth mentioning here that the Ministry of Information Technology and Telecommunications had issued a policy directive last year to establish the International Clearing House (ICH) Exchange for international incoming calls for Long Distance International, Fixed-Line Local Loop, Wireless Local Loop and Mobile Operators: In furtherance to the Ministry’s directive a committee was constituted by the Federal Investigation Agency to function in coordination with the PTA so that to curb nuisance of grey traffic.

Accordingly, in the month of May, this year, a separate committee got constituted with the mandate of investigation and detections of illegal setups, planning of raid actions and follow-up of the cases, comprising of officers from both of the agencies i.e. the PTA and the FIA.

The recent raid and seizure of illegal exchange by the joint team of FIA and PTA was a result of the initiative taken by the IT Ministry, under the leadership of Ms. Anusha Rehman, the State Minister for IT.

Grey trafficking is a major issue for telecom operators as according to a rough estimate approximately 500 million minutes of illegal calls are made every month from Pakistan to abroad. Since the PTA is mandated to stop grey trafficking, a vigilance cell of the Authority has already started working formally to monitor grey trafficking while law enforcement agencies are tasked with legal interception of calls.