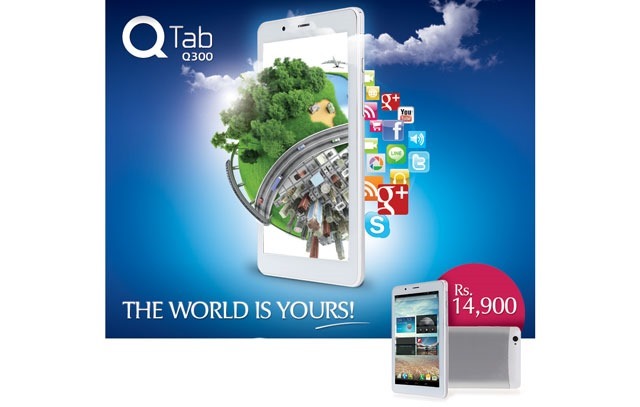 QMobile is a new name in the tablet industry and while its first attempt, QTab X50, was an uninteresting and expensive offering, it hasn’t stopped trying. Its second offering lies in the more-popular 7″ territory and is called the QTab Q300.

The important thing with QTab Q300 is that like its bigger sibling, this particular tablet also comes with 2G and 3G support and unlike the QTab X50, dual-sim connectivity.

Rest of the specs for QTab Q300 are quite uninspiring given that this tablet lies in the budget territory. The display has a resolution of 1024 x 600 pixels which certainly isn’t impressive.

Under the hood, with QTab Q300 you get an unspecified dual-core processor, clocked at 1.3Ghz, 1 GB RAM (finally) and 8 GB internal storage, which is also expandable

Towards the back QTab Q300 has a 5 megapixel autofocus camera with LED Flash. A 2 megapixel camera is also found at the front of QTab Q300. You also get Wi-Fi, microUSB, Bluetooth 4.0, FM Radio and GPS. Battery capacity is set at 2,800 mAh which will be just fine.

Pricing for QTab Q300 is set at Rs. 14,900. So it isn’t the cheapest and comparable packages from Samsung can be had for not a lot more.

But then, virtually none of them support telephony and messaging so they are the features which make it stand out from the large crowd.