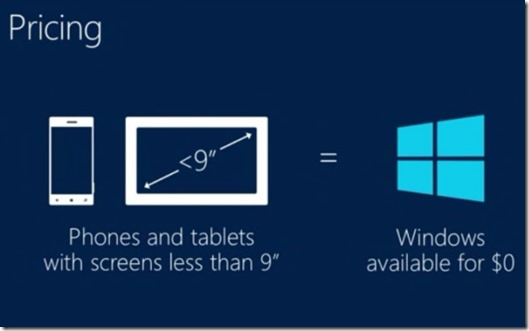 In its quest to make Windows products cheaper than ever, Microsoft is announcing its plans to take off the unpopular Windows licensing scheme from devices with screens lesser than 9″ in size.

This means Windows phablets, smartphones and small tablets are all going to get cheaper than before.

The result will obviously be easily felt as Microsoft is used to charging $50 for every Windows 8.1 licence it sells to manufacturers. (It costs 70% less to more important makers though.)

The Windows Phone licensing fee, on the other hand, is said to cost around $25 per device.

With this important announcement, Redmond is going after Google’s Chromebooks and Android. Chromebooks currently have an average selling price (ASP) of around $330. Microsoft knows it has to combat those as they’ve started to take a bite out of its market share.

“To drive adoption of your applications and get your applications out there for more customers, on phones and tablets with screen sizes less than nine inches we are making Windows available now for zero dollars.” Terry Myerson, executive VP at Microsoft’s OS group

Android, meanwhile, is free to manufacturers, which is why more than 100 companies are using it.

With no licensing fees, Microsoft will now focus more on the services it offers on these devices, and the app stores, as they’re going to be the ultimate source of profit from now onwards.