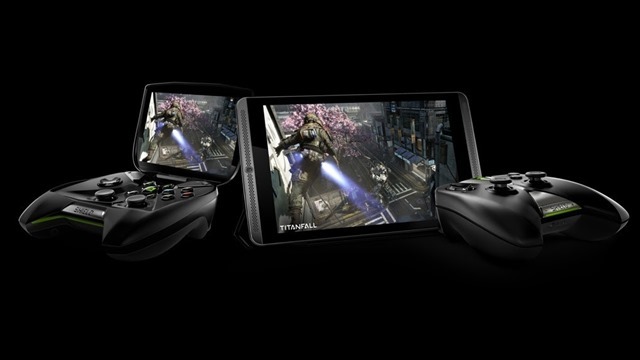 A lot of people don’t remember Nvidia’s Shield Portable. The handheld showed promise with its respectable specifications and the ability to stream games but was ultimately a niche item. Well guess what? Nvidia’s back with its tablet and this time it aims to appeal more to a broader audience.

The specifications of the Shield Tablet really point towards a high-end device. You’re getting an 8″ display at the front with 1080p resolution. The display can also register stylus-input and handwriting and the form factor will certainly favour that (there will also be apps for editing). You’ll also find stereo speakers at the front.

However, the real deal is the Tegra K1 processor here which Nvidia claims is the best-in-class, first-of-its-kind mobile processor which really makes console-quality performance on a handheld possible. It is clocked at 2.2Ghz and has GeForce 192 Kepler cores and the outcome is clear: it blows away the competition.

Other than that, you get 2 GB RAM, 16/32 GB internal storage which is expandable and a pair of 5 megapixel cameras. Connectivity modes include Bluetooth 4.0 LE, microUSB 2.0, miniHDMI and optional 4G LTE.

Its hardware capability makes it the first device capable of streaming games directly from PC, to Twitch and the cloud. While the Shield Hub with its optimized games is always there (only 12 are for the Tegra K1 right now), the tablet will of course be able to download apps from Google Play and other app stores.

Another neat aspect is the ability to connect to a TV via miniHDMI. It can either mirror the display or turn on the
“Console Mode” which shuts off the display and loads the interface onto the TV, which is then controlled via the Shield wireless controller (more on that soon). UHD TVs are also supported.

The first accessory is the cover which also acts as a stand with varying degrees. During gameplay with the controller, you’ll surely need it, even if it costs $39. Also count the styli an accessory; it also has its own slot at the back and is bundled.

And then you have the Shield controller, which controls the TV in Console Mode. That costs $59 but works with only Nvidia’s Shield devices, not with every Android phone in the world. As much as 4 controllers are supported in Console Mode and they also have a headphone jack built-in.

As for the tablet itself, it starts at $299 for the 16 GB model, and $399 for the 32 GB version with 4G LTE. That doesn’t sound much but for the complete experience, you ought to have all the accessories, which will build up the cost.

And lastly, there will be the games which can be pretty expensive. But serious gaming was never about money anyway, was it? With the Shield tablet, Nvidia will surely appeal more to a layman. Whether it performs as well as it seems on paper, or if it gets successful this time remains to be seen.