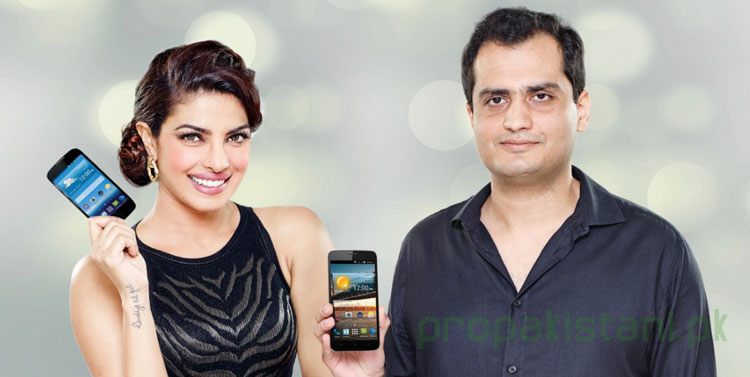 QMobile is about to launch its new smartphone brand with the name of LINQ in Pakistan and to start-off the things, company has signed Priyanka Chopra to endorse its new range of LINQ smartphones.

Reportedly LINQ Smartphone range will include Android phone with better than QMobile specs. While we don’t have exact details as of now, but unofficial word is that LINQ Smartphones will bring more-RAM, enhanced operating system and better storage capacities. Yes, they will be supporting 3G networks.

Zeeshan Akhtar, CEO of Qmobile, confirmed ProPakistani about the launch of LINQ and said new smartphone range is more innovative, qualitative and is specifically tailored for youth.

Unofficial reports suggest that company will launch three smartphones with starting price-tag of Rs. 12,000 that will go up to Rs. 30,000 for high-end device.

We assume that LINQ smartphones will try to contend power hungry smartphone users, who were otherwise not willing to embrace QMobile.

Despite having over 50% market share in Pakistani handset market, and having Z4 and Z3 on the offering, QMobile has struggled to establish its footing in mid-to-high-end market.

LINQ smartphones is clearly an effort to change this.

With Priyanka Chopra onboard, LINQ smartphones are expected to gain popularity among the young who prefer high-end gadgets at a price that is affordable.

LINQ is likely to be launched this Sunday.