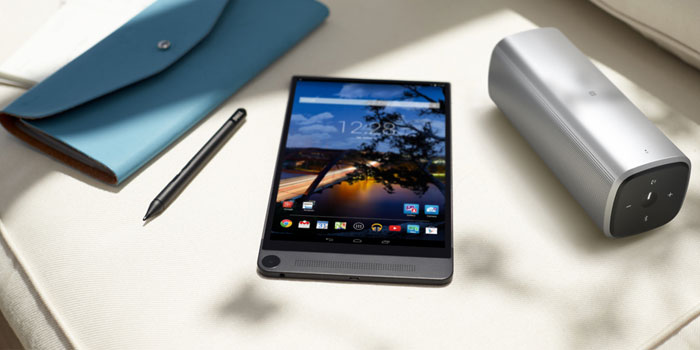 Dell’s Venue 8 7000 has finally been released. Packing an 8.4″ QHD display and Intel’s Real Sense 3D camera, the tablet is the world’s thinnest at just 6mm, 0.1mm thinner than the iPad Air 2.

The 8.4″ OLED display stretches almost edge-to-edge on the sides, making the Venue 8 more compact than the iPad mini. The viewing angles will also most-probably be terrific and colors punchy thanks to the OLED display.

The internals include the new 2.3Ghz quad-core Intel Atom Z3500 processor with 2 GB RAM and 16 GB internal storage, which is expandable by 512 GB via microSD clot.

Probably the biggest highlight though is the Intel RealSense 3D camera at the back. The 8 mp rear-camera is accompanied by 2 more cameras which provide depth and post-processing freedom. After they’ve been shot, you can refocus, change backgrounds and even edit objects in the background. This is also a first for a tablet (or in fact any Android device), since this technology is mainly said to be targeting laptops.

LTE support is optional. The OS running is Android 4.4 KitKat, though an update to Lollipop is on its way.

The tablet will be available for $400 (PKR 40,000), same as the iPad mini 3 and the original iPad Air. At that price point, it will receive some stiff competition but the Dell sure has a few tricks up its sleeve to fight back.