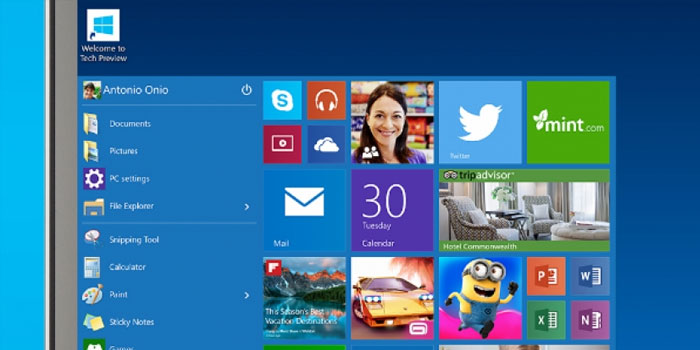 Microsoft has finally unveiled its next operating system, Windows 10. The latest event offered a nice look at the features that users can expect with Windows 10 across PCs, smartphones and tablets. Microsoft representatives emphasized and reemphasized that all these features would make for a much smoother experience.

Let’s start with the cosmetic changes

Joe Belfiore took the stage to announce a modernized Start menu to begin with. A subject of much debate with Windows 8, the Start menu can now set out a traditional list as it used to with older versions and it can also be expanded to fill the entire display. Speaking of display, the Continuum feature allows transition from modern UI to desktop UI as users shift from PC to touchscreen devices.

Windows 10 will offer enhanced multitasking with the Task View feature. The Action Center has been improved with a few tweaks here and there such as activating WiFi and Bluetooth upon clicking quick action buttons. Notifications displayed in the Action Center can also be expanded. For ease of access, Control Panel has also been merged with PC settings rather than having the two in separate locations.

Rest assured, Cortana has been tailored to suit PC interactions. That’s right, assistant Cortana has finally been promoted from Windows Phones to desktop. She is just as resourceful as we have known her to be on mobile devices. Suffice it to say, the reminder and search features she carries will prove helpful for Windows 10 users. Users may ask for her help by calling her out or via text.

A full-fledged conversation that Belfiore had with Cortana at the event seems to suggest that her voice has a natural flow to it. Moreover, she seems to be witty, impulsive and extremely responsive as ever. Belfiore was able to get her to locate his PowerPoint slides, display his photos and play his music in an instant.

This is Project Spartan!

A nice and tidy browser saw the light of day as Belfiore demonstrated a report by The Verge. It’s yet to have a name, though. Wish to highlight something? Simply circle it with your finger. It doesn’t require a stylus to do that. Use a mouse instead, if you so desire. Designed using a new rendering engine, this new browser offers a flurry of modes to users besides just the convenience of use.

The Note taking mode allows users to annotate webpages and later share them with the help of the Share feature with Windows 10. Users also have the option to copy chunks of information off of websites and save it to OneNote using the clipping tool.

In addition, Reading mode sets a book-like layout for content that makes it easy on the eyes. It keeps out all those annoying ads that hamper your reading experience. The Reading list can sync your content across multiple devices for you to view later.

Cortana accompanies you here as well. She will be at your service with maps and directions if you happen to be on the road. Moreover, she offers weather details whenever you frequent the URL bar. What’s more, she would bring up the menu and contact details of a restaurant as you begin browsing its website.

Phil Spencer from Xbox managed to troll the viewers by showing Forza Horizon 2 being played on the screen before revealing that it was merely being streamed. Gamers can also use an Xbox app to share gaming clips with friends across Xbox Live, be it Xbox console owners or PC gamers. All it takes is a shortcut (Windows key + G) to access an interface for saving a screenshot or recording 30 seconds of video.

DirectX 12 API is also headed to Windows 10 which can bump performance of games by 50 percent. Microsoft seems to be taking baby steps in promoting cross play with a title like Fable Legends announced as one that Xbox One and Windows 10 gamers can play with one another. Also, full-fledged activity feed and messaging support have been introduced to make this experience ‘universal’ for gamers as they share messages across desktop and Xbox platforms.

Microsoft has been busy on creating apps tailored for the PC platform. Outlook is one of them. The app looks cleaner and simpler than before given that it has been designed in Word’s engine. Users have the option to personalize it such that the look matches their taste.

A modernized Calendar app was also unveiled which carries across all three platforms. OneDrive storage is also better and smarter than ever before at displaying a simple view of photos you store. The Photos app on board does not need to be prompted to enhance your photos; it simply does it on its own by removing red eye and adjusting the exposure. Similarly, People, Music and Maps apps will receive an overhaul before they are introduced across the board.

All these features will be available to users in the upcoming Windows 10 Preview build starting next week. Also, keep an eye out for the Windows 10 build for Smartphones that you can enjoy after Super Bowl. Windows 10’s consumer version is expected to debut sometime around the end of the year.