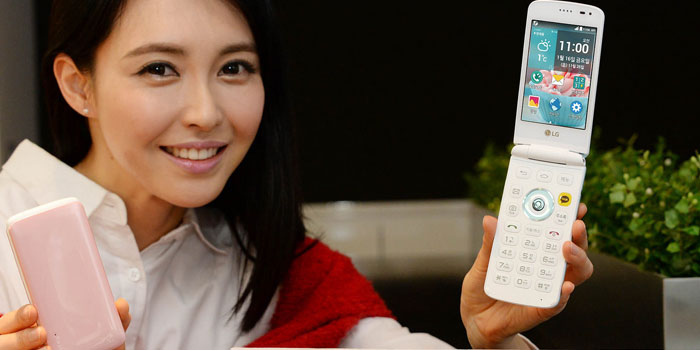 When was the last time you saw a smartphone with a flip cover? You know, like the Motorola Razr from almost a decade ago? Flip phones were all the rage once upon a time. And now LG is bringing them back to the masses.

Enter LG’s Ice Cream Smart, a clam-shell phone with some ‘smarts’ thrown in. It’s a smartphone that is equal parts modern and equal parts retro. The phone comes with a touch screen display AND a physical keypad. If you miss the feeling of composing those SMSes on a bunch of physical buttons, then the LG Ice Cream Smart is the phone to get.

If you loved flip phones, chances are LG’s Ice Cream Smart will be right up your alley

Barring the confused name of this phone, LG has made this phone for people who miss the open-and-shut feeling that old clamshell phones had. The phone makes a recognizable ‘fwap’ sound as you close the flip cover on the phone, serving as a reminder of how flip phones were popular once upon a time. The aesthetics and the way a flip phone handles makes a good case for those who want nostalgia to

LG will be bringing this phone in a variety of colors. LG calls their color choices as the “ever popular emotional pastel-tone colors.” So expect soft and subdued colors on these phones. This is a far cry from the flashy bright colors seen in the Microsoft Lumia series of smartphones.

Currently, its slated to be released in Korean markets only. However, as we’ve seen with the Samsung Galaxy S series, it’s only a matter of time before Korean variants of this phone model will make its way to Pakistani shores.

So what do you think? Is there a market for smart flip phones or will they prove to be a short term gimmick? Should other manufacturers follow suit and bring out flip phones to the masses? It sure would be intriguing to see HTC making its own by customizing the industrial design it uses for the HTC One.