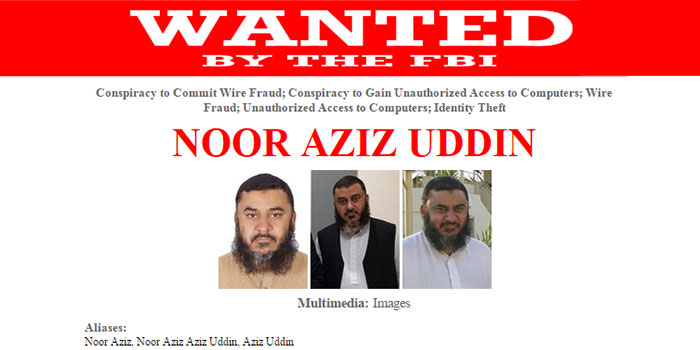 Noor Aziz Uddin and Farhan Arshad, two of the top ten most wanted cyber criminals by the FBI, were arrested by the Karachi cyber crime division of FIA over the weekend.

Mir Mazhar Jabbar, a senior official with Pakistan’s Federal Investigation Agency, said his team had arrested Noor Aziz and Farhan Arshad from the northern part of Karachi. He said, “They were on the most wanted list of the FBI and we have successfully arrested them”.

Arshad and Uddin defrauded people out of more than $50 million

According to allegations, they were involved in running an illegal international telecom scheme which had victims ranging from individuals and companies to government entities in the US as well as other countries.

In late 2013, the FBI released a statement which said. “Arshad and Uddin are part of an international criminal ring that the FBI believes extends into Pakistan, Philippines, Saudi Arabia, Switzerland, Spain, Singapore, Italy, Malaysia and other locations”.

Both of them had $50,000 bounties on their heads at the time of arrest

It is estimated that from November 2008 to April 2012, they defrauded people out of more than $50 million. The scheme, known as international revenue share fraud, involved gaining access to unauthorized business telephone systems and using them for long distance calls to premium rate numbers. The victims end up footing the bill for the calls.

A federal arrest warrant for Noor Aziz Uddin was issued back in June 2012 by the US authorities in New Jersey after he was indicted for conspiracy to commit wire fraud, conspiracy to gain unauthorized access to computers and identity theft. At the time of the arrest, Arshad and Uddin had $50,000 bounties on his head.