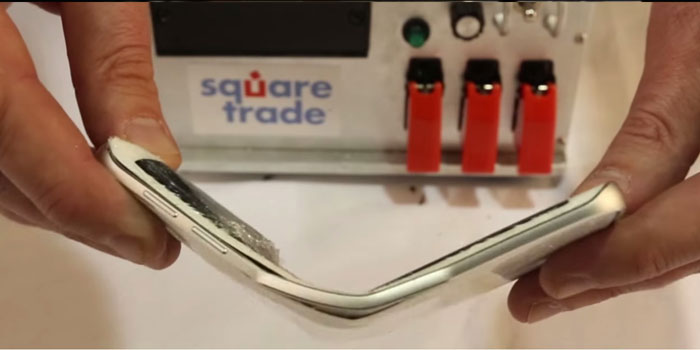 Samsung must be regretting sending all those cheeky tweets to Apple, making fun of their iPhone 6 Plus BendGate controversy. Looks like karma has struck back and now Samsung is the one eating its words. They claimed their phone would not suffer the same weaknesses as the iPhone 6 Plus but guess what, they do.

SquareTrade is a well-known phone insurance company which specializes in warranties for gadgets. They used their bendbot machine to test and see how much weight it would take for an S6 to stop working and bend completely.

It didn’t come as a surprise when the S6 bent at 110 pounds of force. It is also the same amount of force which resulted in the bending of the Iphone 6 plus. The interesting part is that the phone was completely destroyed at 149 pounds while the iPhone 6 plus can withstand it till 179 pounds.

Galaxy S6 bent at 110 pounds of force, the same amount of force which resulted in the bending of the iPhone 6 Plus

Samsung has not denied those claims by Square Trade. Their only rebuttal is that 110 pounds is higher than normal forces of up to 66 pounds in the back pocket. The company further states that if the pressure is applied to the back, the smartphone can withstand a higher force. This is why Samsung has asked Square Trade to do the test again which targets both the front and back side.

Apple can let off a sigh of relief knowing that it isn’t the only company with a chink in its armor. Both companies have made the mistake of making their phones too thin which makes it easy for the phones to bend. Apple contained the negative press by taking journalists on a rare tour of an iPhone testing facility to allay their fears. Samsung’s rebuttals are not enough to address the fears of consumers and it seems like they will have to do something similar.

In a nutshell, all the latest phones from the Mobile giants will bend if you apply pressure to it. It is just the more successful models which will be in the limelight. As long as you are not a plus size person who keeps a phone in his pocket, your phone will be safe. At the end of the day, you need to treat your devices properly. That means no bend tests at home.