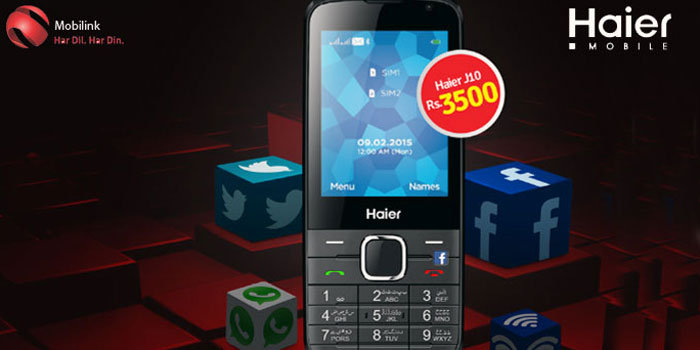 Mobilink in collaboration with Haier Mobile has exclusively launched one of Pakistan’s most affordable 3G Smartphones Haier Klassic J10 for its consumers.

Haier Klassic J10 has all the features which are expected in a 3G smartphone, but at a price of a feature phone. With an unmatched 18 months warranty managed by Haier Mobile, a powerful 1450 mAH battery, dual camera and 3G connectivity, Haier Klassic J10 shall entice first time internet users to take the leap and experience the power of high speed internet.

The launch is in line with Mobilink’s strategy of introducing 3G devices in the market to enable 3G usage in a bid to reduce the digital divide. Available exclusively at all Mobilink Business Centers and franchises at a price of PKR 3500, Haier Klassic J10 comes with two attractive offerings from Mobilink; Free PKR 800 balance and unlimited Facebook, Twitter and Whatsapp usage for four months.

The launch of 3G services in Pakistan has made inroads to consistently introduce the most appealing and innovative handsets, and this exclusive collaboration with Haier greatly enhances Mobilink’s existing 3G device portfolio in the market. Haier Klassic J10 provides customers with the opportunity to experience Mobilink’s superior 3G and voice services on one of the most affordable 3G phones till date.

Haier Mobile’s aim is to introduce the most affordable 3G Phones for the masses in Pakistan so they are empowered to bring change in their daily lives and communities. Our Haier Klassic J10 is a similar 3G Phone, which has all the features you expect most top line 3G Phones to have.

Our decision to partner up with Mobilink for the distribution of Haier Klassic J10 was a no brainer.