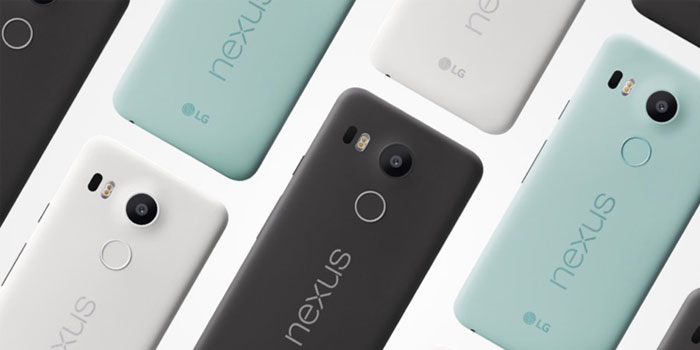 If you are an Android purist, your wait is over. In a slightly different routine, this year Google announced two new Nexus phones, with the Huawei Nexus 6P being the noticeably higher-end offering than the LG Nexus 5X. Read on for details.

It seems like Huawei’s meteoric rise in the Smartphone industry has not gone un-noticed as this is the first time that a Chinese OEM has contributed to the Nexus program. This also shows Google’s focus on the Asian and developing territories. The thing to note here is the design. The Nexus 6P is made of “aeronautical-grade aluminum”, with a unibody just 7.3mm thick.

The back also boasts a black strip on top around the camera at the top and Nexus Imprint fingerprint scanner just below it. The display is a 5.7” AMOLED panel with QHD resolution (518 ppi). It is surrounded by two speakers up and down.

Under the hood, you’ll get the Snapdragon 810 processor with a newer and cooler v2.1 refresh. It is complemented by 3 GB RAM and either 32, 64 or 128 GB internal storage. No 16 GB versions here.

At the back is the same 12.3 megapixel Sony sensor of the Nexus 5X, with 4K video recording, f/2.0 aperture for low-light aid and laser-autofocus. The front also boasts an 8 mp camera with wide-angle lens.

Connectivity includes USB type-C (which supports fast-charging), Bluetooth 4.2, Wi-Fi ac and NFC. You also get the Nexus Imprint fingerprint at the back, with a blazing 600ms speed. Pricing is set at $499 for the starting model, and is set to reach $650 with the 128 GB one.

2013’s Nexus 5 was one easily one of the most popular Smartphones of all time. Thanks to its attractive design, beefy processor, stock Android and rock-bottom pricing, the phone remains a popular one even today.

Now, Google has announced a similar effort for this year’s Nexus program and it’s called the LG Nexus 5X, which tries to emulate the original phone’s success by borrowing heavily from it.

For one, the design is certainly inspired from that phone. It is not premium with curvy, plastic design cues, but like the Nexus 5, shouldn’t exactly be unpleasant.

The 5.2” display at the front comes with a 1080p resolution, further clearing up that this won’t be the top-end release of the year. It does come with Gorilla Glass 3 and an IPS panel.

Under the hood, you’ll get a hexa-core Qualcomm Snapdragon 808 processor, with Adreno 418 GPU and 2 GB RAM. Amount of storage is set at either 16 or 32 GB. The back boasts a 12.3 megapixel camera with dual-LED Flash, IR-assisted Laser Autofocus and 1.55 micron pixel size. It is also capable of shooting 4K videos, but doesn’t come with OIS.

There is a second 5 mp camera at the front, too. Predictably, the phone comes with Android 6.0 Marshmallow, which takes you to the camera by simply double-tapping the home button, not unlike the latest Galaxy flagship offerings. There is a new fingerprint scanner around the back, dubbed the Nexus Imprint. Said to be as fast as 600ms (with further speed coming with time), it will feature Android Pay payments, too.

Connectivity features include Wi-Fi ac, NFC, Bluetooth 4.2 and GPS/GLONASS. Most-importantly, it comes with USB Type-C and support fast-charging to its 2,700 mAh battery through it.

Pricing is set at a relatively acceptable $379.99 for the base 16 GB model, but the version you’d want would be the $429 32 GB variant. For that price, you’ll get a phone with regular updates for years and an OS which can be customized as per your will.