Telenor Pakistan today reported its quarterly revenue of Rs. 25.62 billion during July-September 2015, almost 10% up from Rs. 23.26 billion it had generated during same period last year.

Quarterly financial report issued by Telenor Group said that increase in revenues is mainly due to continued growth in financial services and increased incoming international traffic and higher usage during Eid.

Telenor’s non-mobile revenues during the quarter amounted to Rs. 3.92 billion, 24% up from Rs. 3.08 billion it generated during the same duration last year.

The EBITDA margin increased by 13 percentage points including the positive effects of the abolishment of the SIM Activation tax with effect from 1 July 2015, in addition to improved revenue growth and lower energy costs from efficiency initiatives. This was slightly offset by increased commissions and tax for financial services and imposition of data tax in Punjab and Baluchistan. Adjusted for a one time effect related to the abolishment of the SIM tax, the EBITDA margin for the quarter was 38%.

Telenor said that it prioritized the expenditure towards expanding 3G network coverage and capacity as 437 new sites were added during the quarter, increasing the 3G coverage to 230 cities.

Telenor said that its ARPUs increased 20% to Rs. 214 per user per month, mainly due to data clean-up during biometric re-verification drive as all in-active SIMs were stricken off the records.

Company said that its 34% customers now use data services.

Telenor said that its subscriptions increased by 1.7 million during the quarter taking the number of subscriptions to 33.2 million. The subscription base, however, remained 9% lower than the same quarter last year, mainly due to data clean-up during biometric SIM re-verification drive earlier this year.

Below are highlights of Telenor Pakistan’s finances: 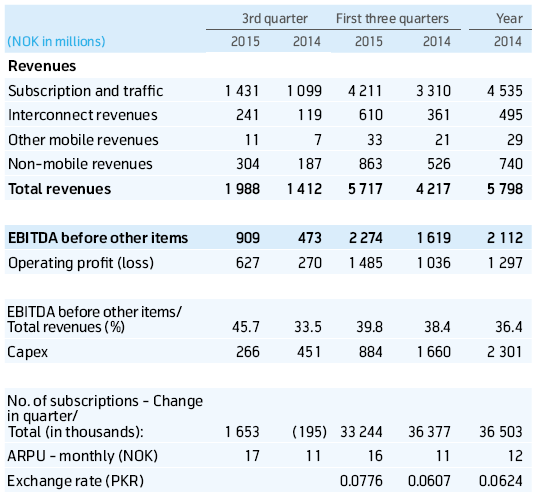