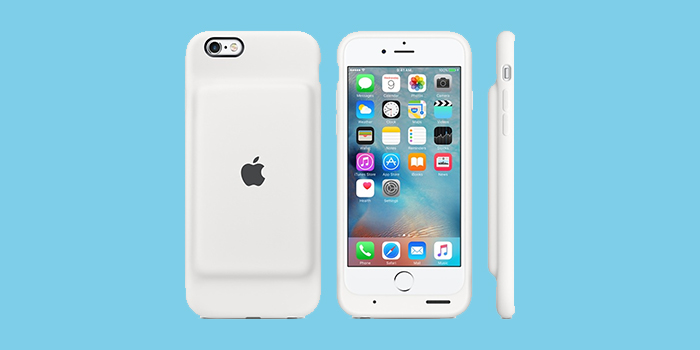 Apple has released its very first Smart Battery Case for the iPhone 6 and 6s. The new accessory was quietly added to their online stores, unusual for a company like Apple which likes to make flashy announcements for the minutest of things. While the iPhones enjoy a rich accessory catalog, most of them are from third-party manufacturers so this comes as a welcome surprise.

The strangest part seems to be the design of the battery case. The case is like the Apple Silicone Case with a big bump on the back for the battery and a long chin at the bottom for the lightning port. There’s no better way to put it really, it really does look like a case with a hump. There is a rubbery top to easily put on the case and the interior has a microfiber lining to keep the phone protected.

The case comes in Charcoal Gray and White colors so nothing for those users who have the Gold version of the iPhone.

The case costs US$ 99 from the official online stores.

How Does it Stack Up in Performance?

When compared with third-party battery cases like the Mophie Juice Pack Air, it has the exact same price. The battery case will increase the talk time to 25 hours and internet use to 18 hours on LTE, an increase of 8 hours from normal usage. The Mophie Juice Pack Air, though, has a 2,750 mAh battery which should be plenty more than what Apple’s Smart Case offers for the same price. Apple has however chosen not to quote the battery capacity for the Smart Case.

While it may look like a plain silicone battery case, Apple Smart Case is actually quite smart. The battery level of the Smart Case is displayed on an iPhone’s notification center and the lock screen thanks to the advanced integration between the case and the phone. The case itself has a discreet notification light which indicates the charging status via an Amber or Green light.

The case also includes a pass-through port so the user can plug in other lightning accessories whilst the case is in use. Smart Case has a much better charging mechanism as well. Unlike regular cases which charge the phone first and then charge the battery pack, Apple’s case can crossover to charge the case mid-way through the phone charge cycle.

Apple Smart Case does not impair cellular performance. Usually, batteries get in the way of antennas. To resolve the issue, Apple used a passive antenna which reroutes frequencies and minimizes the interference.

The battery case is only available for the 4.7 inch iPhone 6 and the 6s. There’s no battery case for the iPhone 6s Plus. If you wish to get the case in Pakistan, you will have to wait a few weeks to get one and put in some extra cash as well. The case will be available at retailers like Media Center in the coming days. Currently, its priced at Rs. 15,900/- at Media Center PK.