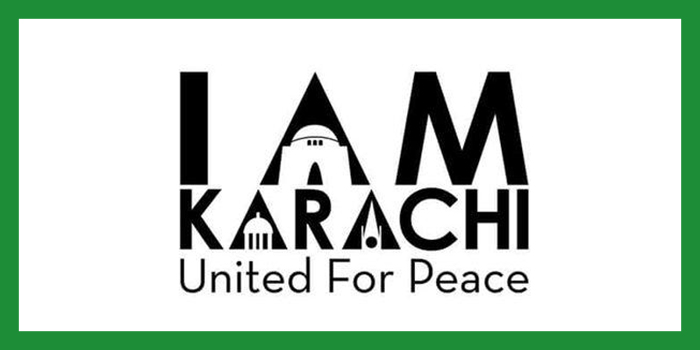 Members of civil society gathered at a local hotel to mark the one-year anniversary of I AM KARACHI, a city-wide movement for peace which was launched by the I AM KARACHI consortium last year on December 24, 2014, in honor of the Founder of the Nation’s birthday. I AM KARACHI is a response to the ever-fluctuating and challenging security situation in the city. By providing a platform for like-minded organizations and individuals to come together and promote socio-cultural activities and campaigns as vehicles for peace building through arts, culture, sports and dialogue, this civil society-led movement aims to rebuild Karachi’s social and cultural fabric.

I AM KARACHI’s Social Impact

Since its inception, I AM KARACHI has engaged over 100,000 citizens across different neighborhoods of Karachi, including Lyari, Korangi, Shirin Jinnah, Gulshan, Orangi, and others, supporting over 100 initiatives for the city with the primary objective of reclaiming and reviving Karachi’s reputation as the City of Lights. I AM KARACHI has now been registered under the Societies’ Act of 1860 as the Society for I AM KARACHI, with Mr. Jameel Yusuf at the helm as the Founding President.

Members of the Executive Committee, along with the 28 founding members of I AM KARACHI, were present at the media briefing and press conference. A wide range of media organizations were in attendance and were welcomed by Mr. Amin Hashwani, the Vice President of I AM KARACHI.

The address was followed by a detailed overview of what I AM KARACHI has achieved in the past year by Ms. Rumana Husain, a Founding Member as well as a writer, story-teller/artist, and activist. Ms. Husain spoke about why the need for a city-wide platform of this stature arose, and noted that:

Shrinking public spaces, both intellectual and physical, have contributed toward greater polarization and distrust amongst various communities along social, economic, ethnic, religious, sectarian and political fronts. Similarly, the civil society needs to have a united front to create a common voice for the city of Karachi: a city which lacks the ownership and compassion required to build this movement. 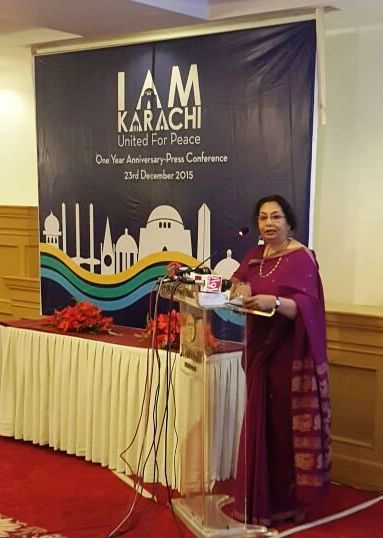 Ms. Husain spoke about some of the activities and initiatives carried out by I AM KARACHI in the first year of its existence. She described one of I AM KARACHI’s most popular initiatives:

I AM KARACHI painted over 2000 walls across the city, removing hate graffiti, which not only gained a lot of attention in the media but also created a sense of ownership amongst the people of the city. The biggest sign of Karachiites taking ownership of their city is that even after months hardly any of our walls have been defaced, despite the politically charged atmosphere leading up to and during the recent Local Bodies elections. This goes to show that I AM KARACHI has been able to break the longstanding myth that the citizens of Karachi have no ability to own or protect their city.

She went on to talk about The I AM KARACHI Music Festival, which was “the first of its kind and attracted more than 70,000 people over a span of three days, featuring a traditional stage and a modern stage and over 60 local artists.”

More Initiatives in the Pipeline

Mr. Jameel Yusuf, the Founding President of I AM KARACHI, then took the stage to talk about the aspirations of and way forward for I AM KARACHI in the coming months. Highlighting the critical role played by civil society organizations in support of the movement, he mentioned that “last year the I AM KARACHI Day attracted over 15,000 people from across the city, with 35 organizations volunteering their time and resources to hold a range of events from cleanliness drives to peace walks all over the city in the name of Karachi.”

He further went on to explain, “I AM KARACHI will go a long way in dispelling false notions and image issues which are nationally and internationally associated with the city of Karachi,” eIaborating that “I AM KARACHI has been the only initiative formidable enough to act as a uniting factor for all geographical and demographic aspects of what is one of the largest metropolises in the world. Many other efforts to bring peace to the city have either have been politically

I AM KARACHI has been the only initiative formidable enough to act as a uniting factor for all geographical and demographic aspects of what is one of the largest metropolises in the world. Many other efforts to bring peace to the city have either have been politically-driven, or too concentrated in certain areas, therefore having failed to gain support and traction across all sections of the city, something which I AM KARACHI has achieved in the short period of a year.

Mr. Jameel Yusuf’s briefing was followed by an interactive Q&A session, where members of the press engaged with the Executive Committee members of I AM KARACHI.