It maybe recalled that PTCL and LinkDotNet had applied for WLL spectrum auction, where all lots — except one 3.5MHz band for Mirpur Region — were auctioned at base price.

Below are auction details:

The auction was conducted in an open and transparent manner through open outcry method, PTA spokesperson told ProPakistani.

While majority of lots were given away at base prices, PTCL and LinkDotNet Telecom Limited (LDN) participated in the auction of one lot of 3.5 GHz in TR-I (Mirpur Region).

LDN offered the highest bid of Rs. 10 million during the process and therefore, was declared the successful bidder for 3.5Mhz lot for Mirpur region. PTCL took the second lot by matching the same price of Rs.10 million.

Spectrum will be awarded after necessary payments by the successful bidders. The total bid price for all spectrum lots combined stood at Rs. 108.4 million.

The auction was witnessed by representatives from AJ&K and GB Councils, Ministry of Information Technology (MoIT), Frequency Allocation Board (FAB) and the telecom industry. 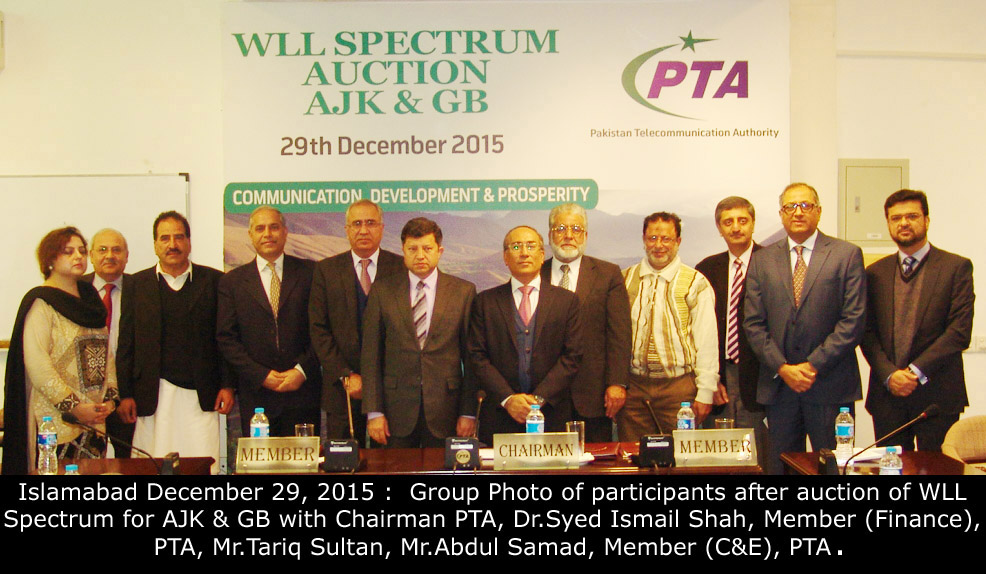 The spokesperson said that subsequent to the Policy Directives of Azad Jammu & Kashmir and Gilgit Baltistan Councils, PTA published advertisement and Information Memorandum (IM) for “Auction of Spectrum in 1900 MHz and 3.5 GHz for WLL Services at AJ&K and GB” on 16th October 2015.

In accordance with the timelines of the auction process, an information session with the prospective bidders was held on 10th November 2015. Applications along with pre-bid deposits were received till 7th December and the qualified bidders were notified on 15th December 2015, while an information package containing necessary details of the auction process was also provided to the qualified applicants on 21st December.

Chairman PTA, Dr.Syed Islamil Shah said the auction was aimed at enhanced telecom services for the people of AJ&K and GB. The successful operators will be able to offer new wireless services. He said it’s a win-win situation government, operators and the consumers as it will ensure revenues for government, business for operators and better services for consumers of the far-off regions. “This will have positive cumulative effect on the economies of these regions”, said the Chairman.

He said that PTA has suggested government to set up handset assembly plants and data centers in AJ&K and GB as natural climate in these areas is very favorable for such businesses.

It merits mentioning here that Wateen and SCO already have WLL licenses for AJK and GB regions.