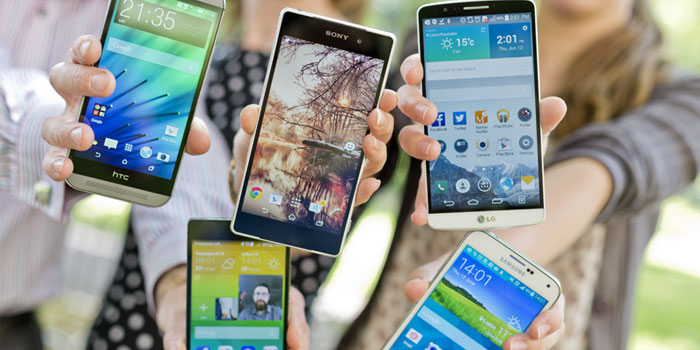 2015 saw some great new innovations in the smartphone industry and we saw some great improvements in smartphones overall. While 2014 brought incremental updates to almost all flagships, this year brought big changes as all manufacturers were trying to one-up their competitors in this tougher-than-ever market. Chinese smartphone makers made the settled market leaders run for their money as they rose to top ranks in smartphone shipments this year.

Great tech and innovations deserve to be remembered and that’s why we have selected our Top Smartphones of 2015. Let’s not keep you waiting so here’s the list.

While picking the top smartphone of the year was tough, Samsung edges ahead of the competition due to massive internal improvements and a new business strategy. The Samsung Galaxy S6 Edge brings a unique dual curved display in a new glass and metal body. Samsung left the plastic designs behind and chose to build a flagship with premium materials. The Galaxy S6 Edge model, however, looks even better thanks to the curves it displays at the front. It’s unlike any other phone available in the market right now.

Samsung Galaxy S6 Edge brings about the best processor package available in 2015. Samsung’s custom-built Exynos processors left the competitor in the dust. The camera department saw major improvements as well and so did internal components like the memory chip, which is the fastest one available at the moment. So Samsung might not have a microSD card, but they can justify it with the new faster internal storage.

Let’s not forget the gorgeous 2K Super AMOLED display that sit at the front. Samsung optimised the battery performance as well and the S6 Edge is the most battery efficient phone (excluding phablets) they have ever made.

Sony has always been at the forefront of innovation. They like to be the first ones to jump into new horizons. With the Xperia Z5 Premium, Sony became the first manufacturer to mass produce a 4K screen inside a smartphone’s body.

The beautiful 4K screen is obviously the most prominent feature of the Z5 Premium differentiating it from the rest of the Z5 line-up which boasts more or less the same features. Not only does the 4K screen bring an astonishing 806 pixels-per-inch, it stretches what technology can achieve surpassing human perception altogether.

The screen is not the only killer feature in the Z5 Premium. It boasts the best camera on a smartphone (according to DXOMark) with a focus time of only 0.03 seconds which is faster than a blink of a eye. There’s a new design language apparent when looking at the Z5 Premium. Sony still uses the same rectangular design and materials but with the most minimalistic elements. The Japanese giant chose to bring its unique take on fingerprint sensors as well.

LG has also been introducing yearly flagships and 2015 was no exception. The LG G4 was a slight step up from the previous flagship the G3, which was already ahead of the pack. The G4 also came with a Quad HD display and arguably the best manual controls in any smartphone camera.

The 16 megapixel camera hosts a large number of user controllable options. Not only that it also has the laser autofocus from the G3 and all the features we have come to expect from a flagship camera like the ability to shoot 4K and a panorama resolution of 104 megapixels. The camera aims to be on par with professional cameras and could potentially be just that.

Not only that, the G4 has kept features like a user replaceable battery and a micro SD card slot, a features mostly not included in the latest flagships. The G4 comes with a host of replaceable back cover options, from leather to ceramic coating, providing great options to customize your phone to your liking.

iPhones reaching the top ranking smartphones of the year has become a norm. Whether the devices are exceptional or not, sales figure prove time and time again that iPhones are nothing less than exceptional. Apple manages to take the best from Android and Windows phones and make it better with their closed iOS ecosystem.

Their custom processors and GPUs, despite seeming low in strength, keep up or even outpace their competitors. iPhone 6S is just another example. Coming with the same body as the iPhone 6, it makes major internal improvements following the tradition of the “S” line-up of phones.

In terms of specs, the new 1080p screen has a PPI of 401 and is a great display overall. Another great new feature is the 3D touch. It provides a new layer to the UI and usability and has a practical integration in iOS.

Huawei is known for great phones and build quality, the Huawei Mate 8 follows the same trend. It offers top of the line specs with a premium metallic build. The Mate 8 appears bezel-less because of the 2.5D display.

Huawei has been able to put the best specs on the market in one great overall package. The Mate 8 is the spec champion in terms of hardware. It has a large 6 inch screen at 1080p, a Sony 16 MP sensor and to top it off it has a massive 4000 mAh battery. It also has a fingerprint sensor, which is somewhat a requirement in the flagships of this year.

What do you think of our take on the top smartphones? Feel free to let us know in the comments below!