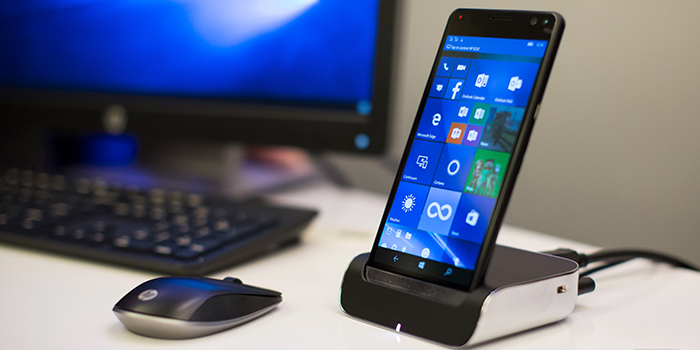 No one could’ve thought that HP was about to hop back in the mobile industry and that too with a class leading device. The new Elite x3 is not only that, but also with it HP is trying to get the markets, smartphones, laptop and desktop all in one shot.

If you too were psyched about the impending arrival of the Surface phone, brace yourself because it already has its biggest competitor. Don’t be surprised if Microsoft decides to support the Elite x3 and retracts its own effort, either.

Brimming with potential, the Elite x3 comes with a 6″ OLED display with 1440p resolution and a poly carbonate and metallic design. It is also IP67 certified for water & dust protection, as well as protection against four-feet drops.

Under the hood, welcome the latest octa-core Snapdragon 820 processor with 4 GB RAM and 64 GB storage, which is expandable by 2 TB via microSD. The back boasts a 16 MP f/2.0 camera with LED flash.

For a device which is reasonably thin (7.8 mm), the Elite x3 comes with a 4,150 mAh battery. There’s also a fingerprint scanner at the back (not shown in developer version), front-facing (Bang & Olufsen) speakers, Miracast, NFC, GPS, Bluetooth 4.0 and optional dual SIM.

The phone itself doesn’t have an x86 processor, but can use the Continuum feature to power a PC which inserted in a dedicated dock. The sick itself comes with an impressive array of ports such as USB Type-A, Type-C, headphone jack and a DisplayPort.

It doubles as a charger when the phone is not under use as a desktop. While only Universal Windows apps work under Continuum, HP is also working with Citrix on a feature called WorkSpaces, which allows enterprises to load any custom asp they want when connected to a server.

We have seen PadFone devices from Asus for a long time but HP is taking a markedly different approach.

Instead of packing the phone in a slot at the back, the Elite x3 either beams the OS wirelessly to the device, or connects via USB type-C. It misses out on internals of its own. However, it does come with a 12.5″ display, a Surface 4-inspired keyboard and a large 48Whr battery.

With the Elite x3, HP is hoping you’ll use your phone for everything you do. We are yet to see whether that approach will work or not, but it is clear that business users are the main target here.