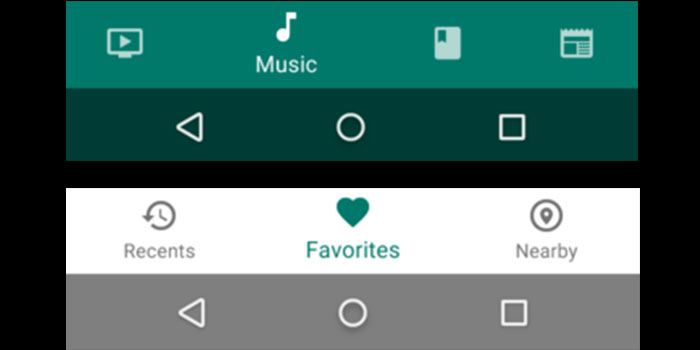 One of the most easily seen differences between Android apps and their iOS counterparts has been the presence of a bottom navigation bar in the latter versions, which makes it easy to quickly to toggle between multiple segments in an app. That difference is likely going to get mitigated as the revised Google design guidelines finally show the seemingly minute-looking option in Material Design.

So far, Android apps have used a “hamburger” button (the one with three lines) on the top to navigate between an app, a distinctive and real-estate saving touch but one which is not exactly the quickest.

The buttons on the navigation bar will appear highlighted when they’re pressed, making them appear distinguishable easily. Pressing these buttons take you to the top of their respective pages following the cross-fade animation of recent Android iterations.

The option is not exactly new on Android now, as Google’s own plethora of stock apps, including Google+ are already featuring it in varying degrees. Now it is also available to the ordinary developer.

Still, the navigation bar is not going to be added blindly to every possible app in existence; Google still reckons apps which have three to five sections are the perfect for this form of design, with any more sections appropriate for the “hamburger” menu, and lower ones for tabs. And of course, Google isn’t going to tweak the developers’ ear if they don’t comply.

Of course, the navigation bar does take away some of the space, especially in iOS where it doesn’t disappear when you scroll down but that apparently won’t be the case in Android, which is good as it shows Google adding some pragmatic touch, along with inspiration. Expect it to make a major appearance in the detailed uncovering of the new Android N.