Pakistan Telecommunication Authority has invited almost everyone to comment (read “show concerns if any”) on proposed Mobilink-Warid merger.

A public notice (from PTA) published in newspapers today has asked all possible stakeholders, who might get affected due to this merger, to write to PTA for any of their concerns. Even general public can go ahead and write their comments to PTA on the merger.

PTA says that it has received the application for the merger of Mobilink-Warid. But before it grants the approval, they are asking almost every possible individual to raise any questions before PTA makes a decision.

Not to mention, PTA previously wrote letters to every possible government, semi-government body (including NAB, FIA, FBR, cabinet division, senate and NA committees) for their comments on the proposed merger. 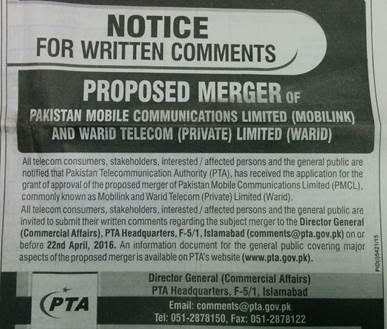 Industry experts are of the opinion that PTA is taking extra measures just to be sure that no-one’s able to raise any objections after approvals are granted by PTA.

“Since this is first of its kind merger in Pakistan and there’s no precedent or SOP in place, it’s good to go an extra mile to be sure that everything is done rightly”, said an expert.

PTA’s approval is one of the four mandatory approvals that Mobilink and Warid will have to attain before going ahead with the merger.

CCP’s approval, that has already been granted, was considered the most crucial one.

Other than CCP and PTA, SECP and SBP will also review and approve the merger.

After these four regulatory approvals, Islamabad High Court will finally review the decisions of all bodies to give a final go ahead for the deal.