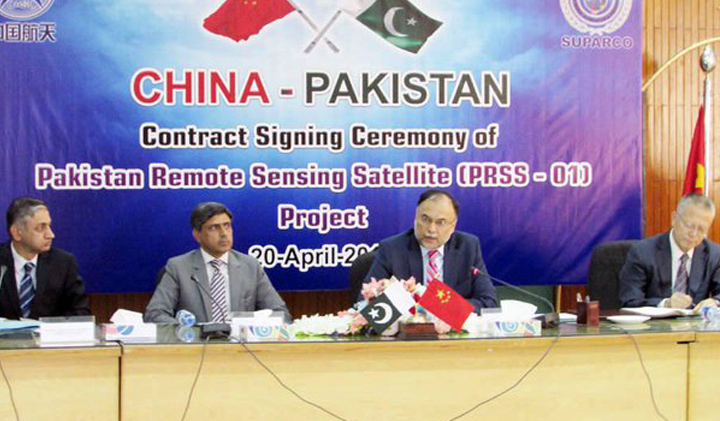 Ahsan Iqbal, Federal Minister for Planning, Development and Reforms, and Yin Limping, President of CGWIC, signed the agreement for the same on Wednesday.

While speaking at the occasion, Mr. Iqbal said that this historic agreement has carried Pakistan-China friendship from the Himalayas to the stars. He hopes to see the cooperation between the countries in space sciences to bring about more interaction in socio-economic projects and several other fields. The minister said that he considers space technology to be an important part of socio-economic development.

Signed contract for Pakistan's Remote Sensing Satellite Project to be commissioned in 2018. Yet another milestone pic.twitter.com/Yob3n4t7Lr

Mr. Iqbal was optimistic that the virtue of the contract allows Pakistan to be able to carry out the planning and implementation of all development projects under the China-Pakistan Economic Corridor (CPEC) in a scientific manner.

The Minister for Planning called the PRSS-1 as one of the flagship projects between Pakistan and China under the CPEC, hoping that it will redefine bilateral relations between the companies.

How Can Pakistan Benefit From this Project?

An advantage of the agreement is that the satellite project will help Pakistan with its national security matters and strengthen border security and surveillance capabilities. The Pakistani minister even proposed sending a Pakistani astronaut to space via a Chinese spaceship in 2017 as a symbol of strong relations amongst the nations.

PRSS-1 will be the first remote sensing satellite from Pakistan which also supports multiple applications. Mr. Iqbal thinks that the satellite project has gathered more significance due to the ongoing CPEC and related projects.