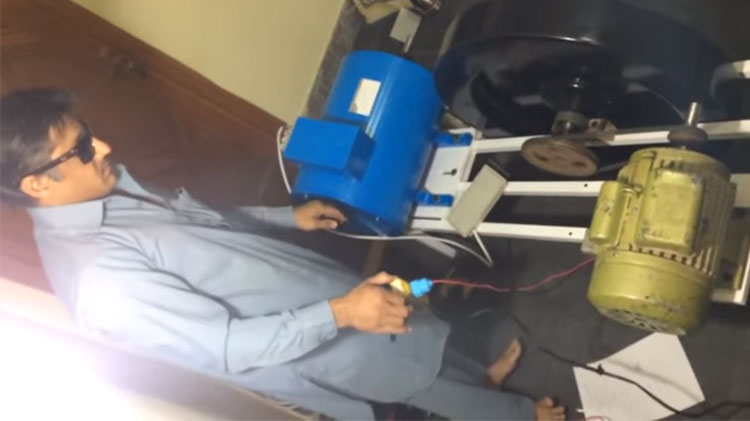 Many of you will be aware of the latest viral video on social media that showcases a generator that runs on ‘free energy’. You want to believe the best in people but a small voice still cries out ‘bullshit!’ in the face of seemingly convincing evidence.

We’re here to tell you that you should listen to that voice. The video is fake and the work of another charlatan seeking to con people out of hard earned cash.

This guy from KPK, however, thinks otherwise and has made a video claiming that he can generate electricity out of thin air, which is an absolute lie.

Let’s explain what’s happening, but before that, watch the video below — or skip it if you don’t want to waste minutes.

See the big black circular thing? It’s called a flywheel. When he first plugged in, he stored electric energy as kinetic energy in it. After plugging out, it was simply looped back to the generator to the AC motor.

Make no mistake, if that video was longer, it would have stopped running since the flywheel can only store finite energy and wouldn’t run forever.

Honestly, if it were really legitimate, the discovery of free energy wouldn’t be announced by a YouTube video and a Whatsapp number to be contacted for further details. You’d first get the Nobel Prize (and the cool million dollars alongside it), get a patent and live the rest of your life on those sweet sweet royalties. Or develop something yourself if you’re the entrepreneurial type.

All being said, we sincerely hope that one day we report when a Pakistani has solved the energy crisis in actuality and not with the intention to scam people. Till then, put your cynical hats on and browse away.

To Noman Shah Afridi, the showman of the video, you should be ashamed of yourself. Tesla would be rolling in his grave at your antics. Oh and lose the sunglasses indoors, they make you look like a douche.