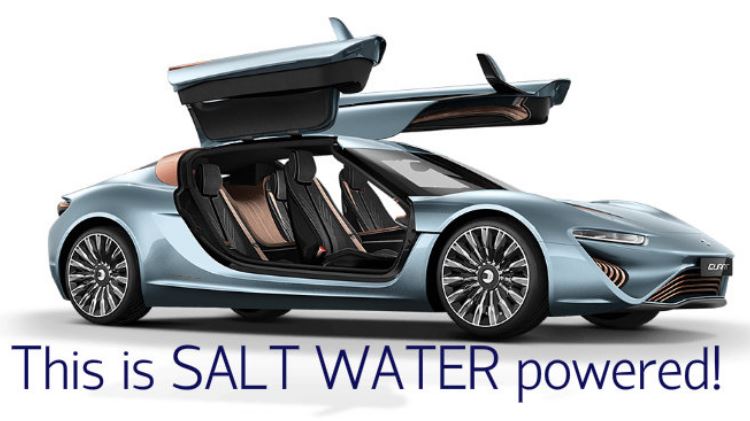 The automobile industry has been looking for alternative power sources for decades as fossil fuels won’t last forever. Several countries are trying new fuels and technologies such as hydrogen cars, electric cars, organic ethanol based cars, solar cars and what not. Some car manufacturers have even found interim solutions like hybrid vehicles.

Today, we are going to talk about a new solution proposed by a German company, a solution that can help cars run on saltwater.

Yes you heard that right.

While other technologies are gaining traction in some countries, a German company, NanoFlowcell, seems to have found the magic solution to the problem. They have developed cars which only need saltwater and can travel 2-3 times more than fossil fuel powered cars.

How Do Saltwater Cars Work?

Saltwater cars work very similar to Hydrogen powered cars. NanoFlowcell have come up with a way to utilize Hydrogen in cars without using high pressure systems. Their cars use saltwater. The saltwater is used to generate electricity and run the cars.

If you want to go a bit more technical, the cars have two tanks which are filled with dissolved metallic salts. These dissolved salts have opposite ionic charges which are then pumped through a membrane.

The chemical reaction which unites both molecular structures produces energy which is used to power the four electric motors, each of which powers one of the wheels, by utilizing the built-in super capacitors.

What Sort of Cars Have They Made?

NanoFlowcell have developed three cars so far. The first one was a sports car followed by one consumer grade and a prototype.

Of course, most of us would be interested in the consumer which is also the most interesting among all models. And the best part? These cars have been approved for testing in Europe for quite some time now.

The company says the consumer grade model Quantino will be an affordable car. It boasts an 80kW electric motor (108 horsepower) which can send the car from 0 to 100 km/h in just five seconds.

Of course, it is not a racing car, but by utilizing the built-in batteries the car can increase its acceleration. The electric engine is capable of topping 200km/h while still working virtually silently.

The most interesting point about the Quantino is its mileage. It can achieve well more than 1,000 Km on a single tank. In a recent endurance test, the car was used to set a new world record where it managed to last for 14 hours and 3 minutes before the driver gave in due to exhaustion.

The two 159 litre tanks were still at 78 percent of their initial value when the driver stopped. The car traveled at an average speed of 74.8 Km/h during the endurance test.

Despite its racing horse nature, its two 250 litre tanks can manage an 800 km trip on a single fill.

The car weighs over 2,000 kgs but can still keep up with the McLaren P1 in terms of acceleration.

Quant E Sportlimosine was the first prototype car which was showcased in 2014. It comes with a sports design and performance which is very similar to the Quant FE. Despite being a prototype model, the car is street legal and has been certified by the German Transport department.

The Quant E can travel up to 600 kilometers on a single tank, given its lesser tank capacity. It was the original car which became the basis for the Quant FE sports saloon and the Quantino mid-size car.

The all-wheel drive car comes with a 680kW (925 horsepower) electric motor. It has an amazing top speed of 380Km/h and the same acceleration as the Quant FE.

Why Haven’t Other Secure Hydrogen Systems Come to Market?

Other companies did develop some astoundingly cheap technologies to make use of Hydrogen in cars and other associated industries. But due to some unfortunate incidents none of them managed to go mainstream.

Previously, Japanese Genepax developed a way to turn water to Hydrogen but the company went bankrupt after releasing their first car. They still hold the patent to the technology which can split Hydrogen from water through a chemical reaction and produce oxygen as a by-product.

Stanely Allen Meyer also found a way to use hydrogen and oxygen to run cars and was allegedly poisoned in 1998 right after he met with some investors. According to his brother, he said “They poisoned me” before he collapsed after the meeting.

How Soon Can We Expect Saltwater Cars?

NanoFlowcell has manufactured multiple cars and do plan to produce a small batch of cars for the European market. The company has hinted that instead of producing cars, they will license the technology to current manufacturers and assist in the roll out of saltwater filling stations in all markets.

We can expect the technology to be incorporated in cars within the next few years if car manufacturers and NanoFlowcell strike a licensing deal. The technology is really promising and could well prove to be the future of the automobile industry. Given that how it uses saltwater, the best technology also seems environmentally friendly as well.