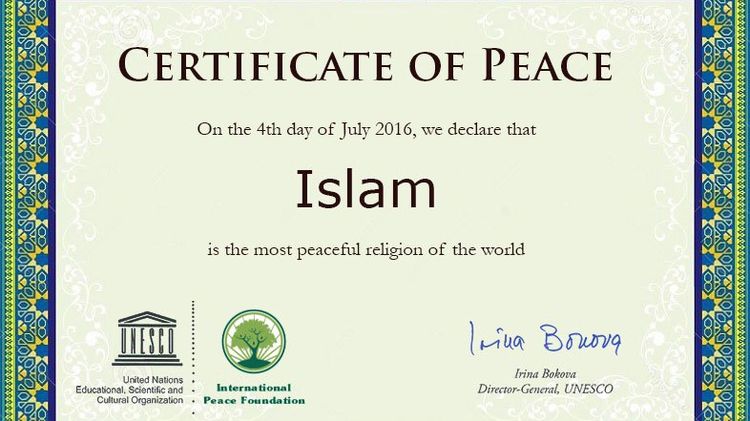 Yet again, we have come across a story which was not cross-checked and published as news by most online publishers and even some Pakistani TV channels. Many news websites published and tweeted about a UNESCO certificate which certifies that Islam is the most peaceful religion in the world.

In an act, which can only be defined as foolish, many local and international sites from the Muslim world started quoting the fake certificate. Some of them even added remarks from a UNESCO press release which never really existed.

UNESCO stands for United Nations Educational, Scientific and Cultural Organisation. As far as religion is concerned, the international organisation is mandated to promote interreligious or intercultural dialogues on a global scale. It has nothing to do with awarding certificates to religions.

Some of the most popular online publishers and news sites (including some TV channel websites) are among the long list of fooled news service providers and online publishers. We can confirm that ARY News and Radio Pakistan (Government run website) published the story on their websites.

It is very unfortunate that these Pakistani news providers publish a story without even doing a basic background check. A simple Google search reveals that the whole story was made up by an Indian website called JuntaKaReporter. It is a satirical website and all stories they publish are fake.

They have a disclaimer on their website saying “You seriously believe this **** is real? Before you sue us, do a favor to your intelligence and realize that it is a satire website. Everything published here is made up. But if you are still that stupid and hurt, we are sorry.”

Sadly, no one cared to cross check whether the story was indeed real. The news went viral instantly and UNESCO had to quickly clarify their stance and denounce the fake statement. In a statement released yesterday, UNESCO states “We wish to refer to the recent allegations posted on the website juntakareporter, citing an alleged statement and certificate from UNESCO declaring “Islam as the most peaceful religion of the world”. Such statement was never made by the Organization and that the certificate reproduced on this website is a fake one.”

News posts also mentioned that UNESCO had worked in partnership with Internal Peace Foundation (IPF) for six months before issuing the certificate. The UN organisation clarified that they have never worked with any such organisation to issue such a diploma nor do they support IPF in any way.

We recently reported about the media being fooled by a scientist’s fake claims. Not long ago, Samaa was fined for misreporting. Many other TV channels have also come under fire for reporting made-up news. Before that we heard about Darren Sammy being awarded Pakistani citizenship by CM KPK Pervez Khattak’s fake account. In the recent past, we have seen many other examples of misreporting by TV and online news providers. This has gone on long enough and it is time that resharing fake news without any sort of fact verification is considered a legal violation.

Not only do acts like these ruin the country’s image internationally, they cause unnecessary scandals. This UNESCO Certificate of Peace story was published internationally and maligned Muslims’ name worldwide. As news of the authenticity of the story reaches the international public, it will present a negative image of Muslims. Do we really want that to happen?

Let us know what you think about the matter in the comments below.