VimpelCom will invest one billion dollars in Pakistan over next five years, said Jean-Yves Charlier, CEO, VimpelCom, the parent group of Mobilink and Warid.

“We are going to make major investments in network, IT systems, infrastructure and in new services for customers during next five years with an ambition to build the best network with the widest coverage and the most advanced 3G and 4G LTE services in the country”, said the VimpelCom CEO during a media briefing in Islamabad today.

He said that major investments will be made to enhance network, IT systems and in developing country’s largest store network in the country.

“We will be investing over 300 million dollars in next one year alone”, said Aamir Ibrahim, CEO of Mobilink, who was also present at the briefing.

Not to mention, Mobilink has invested over 5 billion dollars till to date in Pakistan. 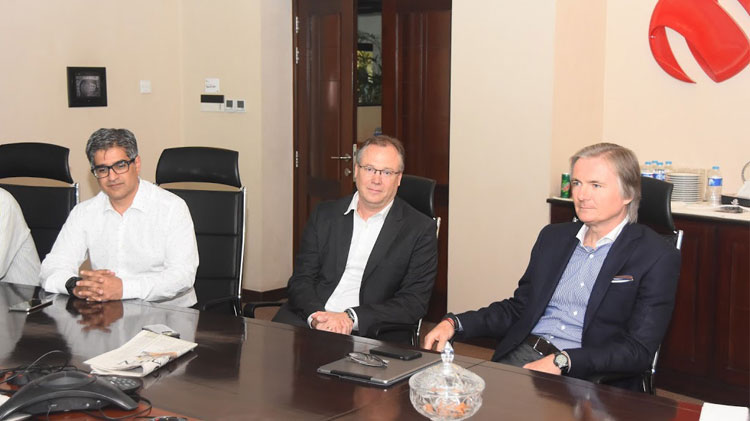 VimpelCom CEO said that his group has signed a billion dollar contract with Ericsson to replace IT systems across all markets — where VimpelCom operates — to offer new digital services and Mobilink and Warid will benefit from these investments very soon.

He mentioned that there will be over 1,500 new brand stores or mini franchises – some of them to be owned by the company — to be established across country, creating over 5,000 jobs with-in a short span of time.

“We fundamentally believe that the growth opportunities in Pakistan are very substantial, mainly due to young population here and penetration of Mobile services that are still on the rise in the country”, explained Mr. Charlier.

The CEO said that Mobilink has achieved double figure revenue growth over past 12 months and this is only the beginning of the Smartphone adoption in the country.

“We fundamentally think that the future of telecoms in Pakistan is ahead of us, particularly with 200 million inhabitants and a very young population that wants to open up to the world, we see significant growth opportunities”, said the CEO while commenting on the way VimpelCom sees Pakistani telecom market.

1 – It’s a win for consumers in Pakistan to have one leading operator with better services, expanded coverage, more 3G and 4G networks across the country that will be accessible for over 50 million customers.

2 – Then it’s a win for Pakistan as a country because infrastructure is key to the economic growth of Pakistan with having a leading network operator – that has the vision of building extensive 3G and 4G networks across Pakistan – as a major milestone that will attract further foreign investment in the future. This merger will also potentially mean a foundation for a new digital economy in the country.

Jean-Yves said that both Mobilink and Warid are merged with an ambition of building the best network, the widest coverage, the most advanced 3G and 4G LTE network as an outcome of the transaction.

CEO VimpelCom said that this merger will bring new services to the consumers across Pakistan and that’s exactly how merged company will grow its efficiencies and ultimately the revenues.

He said that instead of increasing prices – very usual after mergers – Mobilink-Warid merger will instead mean more digital services for consumers and businesses alike.

While commenting on the future of employees, Jean-Yves Charlier said that a big objective of this overall strategy is become an employer of choice.

“Obviously in a merger there are changes in organizations, which are necessary, but we want to remain – if not to enhance – as an employer of choice”, said the CEO.

“We are considering centralizing some of our global services here in Pakistan as a hub to serve other VimpelCom subsidiaries across the world. Furthermore, we are also looking at possibilities of exporting talent from Pakistan to other markets where there is a requirement to ultimately create more net jobs in next few years”, commented the VimpelCom CEO.

When asked about the brand name of the merged company, Jean-Yves Charlier said that they haven’t decided anyone on it yet.