Ever tried Googling yourself? Admit it. We all have at some point. Google already lets users set up Google Alerts for anything personal which get shared on the internet.

Now, Google has improved the feature and is calling it “Stay in the loop”. Whenever your name gets mentioned on the internet, you will get an email update from Google.

Previously, when you searched your name on Google, it gave you your Facebook, Twitter, Google+ profiles and some random results which might not be related to you. Now, you get a widget at the bottom asking you to set up an alert and easily keep track of any new mentioned of you on the web. However, you will only get this widget if you are signed into Google and have enabled the option to save your web and app activity.

When you click on the widget, Google takes you to another webpage with a form for the Stay in the Loop feature. Your name is already entered in quotation marks and you can edit all the other settings before pressing the Create Alert button. Well, that’s it and Google will keep track of anybody who mentions you. 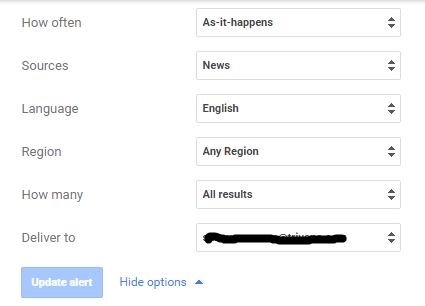 Google Alerts has been around for over a decade, but the procedure to set up an alert wasn’t as simple as this. The same service is probably working at the back end of this cool feature. You can also set email frequency, sources, languages and regions to improve the results.

Don’t be surprised to see a whole lot of information about yourself on the internet. The web, specifically Google, knows a lot about you, including what you do and when you do it. If you want Google’s info on you, head to the My Activity page where you can also remove history if you choose so.