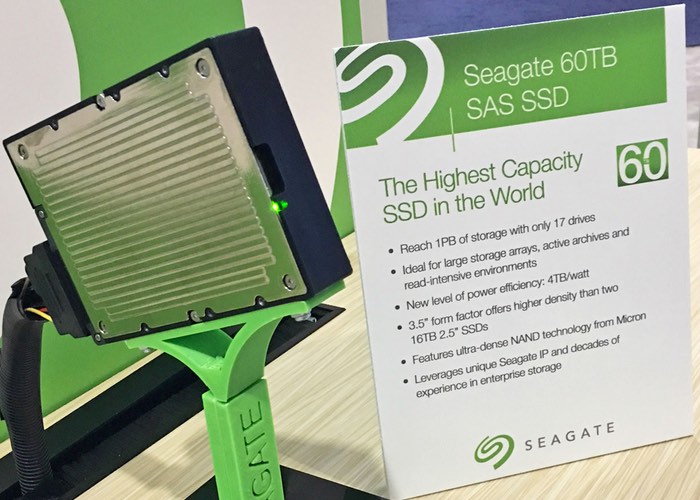 Just a few weeks back, Seagate announced the world’s first 10 Tb hard drive for consumers and now it already has a 60 TB SSD. What in the heavens is going on, you say?

As you’d expect, a larger SSD has never been brought to market. Samsung did uncover a 15 TB one back in March, which had a 2.5-inch form factor and a $10,000 price tag but that one isn’t looking quite nearly as good now.

The Seagate trumps the Samsung drive by offering twice the density and four times its capacity as this solid-state drive comes in the 3.5-inch form factor, which is good for enterprises. Now, if you want a petabyte of storage, all you need is just 17 of these drives. Sounds OK?

It offers sequential read and write speeds of 1500 MB/s and 1000 MB/s, respectively, and uses 15W of power, or just 4 terabytes per watt.

Its 60 TB of data is good for moving up to 400 million photos, or 12,000 DVDs, not that anyone has that sort of data but we’re not judging. If that is not enough, its new architecture paves the way for a 100 TB version in the future.

Pricing details aren’t available but Seagate reckons it will have the lowest price per a single GB of any flash data available to date. It will hit the market in 2017.