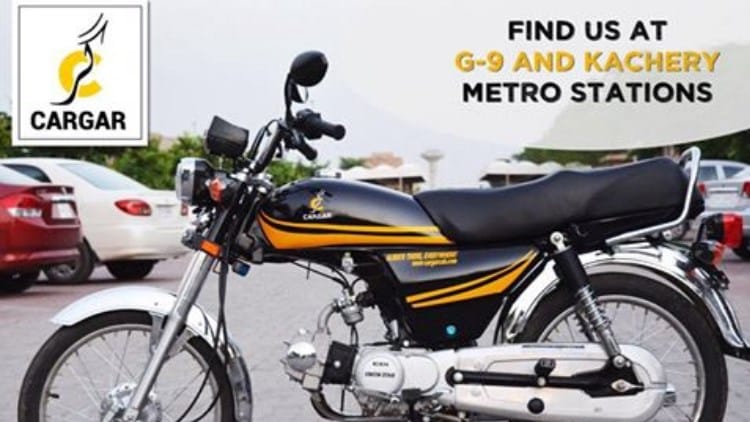 We may have our Travly and Careems and Ubers going around, all competing to become the first choice among ride-hailing services in Pakistan. But for a majority of Pakistanis with limited budgets, opting for cheaper transport options makes more sense.

The above mentioned services involve 3 to 4-wheelers, with cars and rickshaws for your ride. Some of them even come with additional waiting and base charges, which may put off people who hail their transport in a traditional way.

Cargar, a new startup from Pakistan, is hoping to change all that. Cargar is introducing motorcycle-based taxi service. They are rolling out in Islamabad and Rawalpindi now, in near proximity of metro stations initially.

About Faran Ahmed, the Man Behind Cargar

Faran Ahmed, a graduate from NUST and a software engineer by trade, is the CEO behind Cargar. His thinking was that many Pakistanis need cheaper transportation options. Hence the use of ‘bike taxis’.

Cargar aims to be the cheapest option of hailing a ride. They are using bikes in order to keep costs low.

He got the inspiration for the service while he was in Indonesia last year, observing how students there were using bike taxis to commute. And of course, the traffic in Indonesia reminded him of the traffic back home. It was only a matter of putting 2 and 2 together, which is 4 if you’re weak in maths.

How much is Cargar Charging their Customers?

The service is charging Rs. 15 per km, with Rs. 20 as base charges. No waiting charges or cancellation charges as seen with other ride-hailing services.

All bikes will be in-house, with Cargar responsible for the vehicles and their riders. This is in sharp contrast to the model that car-hailing services like Uber and Careem follow.

Faran says that initially they will keep things in-house. Once the startup establishes a solid base, it will be moving on to the Uber Model.

Though specifics weren’t shared, Faran had this to say about their revenue-sharing model:

We have designed our percentage sharing model in a way that our subscribers will be able to generate a handsome monthly income with little investment.

The startup launched its services on Monday 22nd 2016. They are planning to expand to Lahore and Karachi once they’ve established themselves in the twin cities of Rawalpindi-Islamabad. The startup is web-based for now, since they are developing a mobile app for the service. This can be a concern if you want to track your ride.

Additionally, questions abound about safety and security of passengers especially. The company needs to build consumer confidence by training and vetting drivers thoroughly. It also needs to give users of its services the tools to report any untoward incidents.

Training of drivers should also account for good road sense, as Pakistani roads are no stranger to many bikers prone to taking risky shortcuts and maneuvers. The new startup certainly has its work cut out for it.

If you are looking to try their service in Islamabad-Rawalpindi, check them out from here.