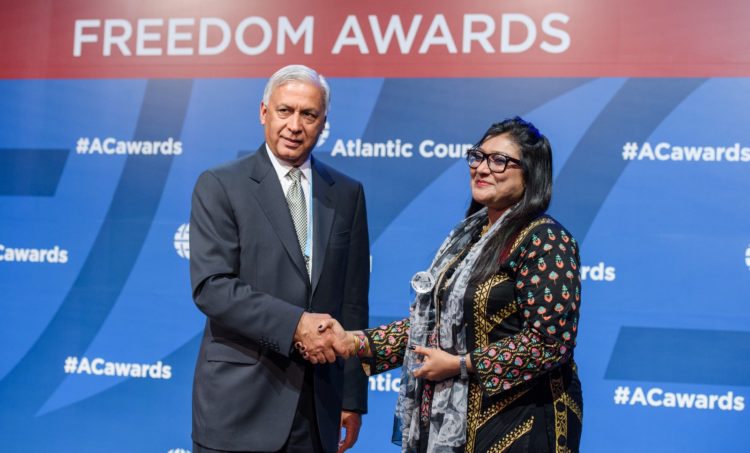 Director of the Digital Right Foundation Nighat Dad has been recently nominated for the Dutch Human Rights Tulip award 2016. It is an annual award for individuals as well as organizations that promote the human rights in “an innovative way,” from all over the world.

The award is presented by the Netherlands’s Minister of Foreign Affairs.

Amongst many things, Nighat Dad is a lawyer, Internet activist, independent development consultant and also a researcher.

Last year, she was included in TIME magazine’s list of next generation leaders, given her efforts for helping women fight against online harassment.

Earlier this year she was awarded the Atlantic Council Digital Freedom Award 2016 for defending and advancing the cause of freedom.

Digital Rights Foundation is one of the ten nominees for the award. Three of the nominees are to be chosen by a public vote from which the Dutch Minister will handpick the winners and will present the bronze tulip-shaped statue, on December 10th.

‘We tell Internet users how to adjust their privacy settings, to make sure they have secure connections, change their passwords regularly and not to share unnecessary information.’ – Nighat Dad

She also said, “Women should come seek help if they are targeted and not feel ashamed.”

About The Digital Rights Foundation

The Digital Rights Foundation is a non-profit organization which teaches and promotes digital rights, especially for women. It educates them in terms of how to respond to online harassment.

Her organization also campaigns against legislation in favor of the Internet surveillance and dissemination of internet user information to foreign and domestic state agencies and businesses.

You can vote for Nighat Dad online. Voting ends at September 7. You can cast your vote for her here.