The evolution of electronic media has been fast and swift, with Smartphones playing a major role in it.

Speaking strictly about the Southeast Asia region we see that the growth of smartphones is still alive unlike in Europe, U.S or China.

However, the market for smartphones still suffers from saturation. This is one of the reasons for hindered growth in Southeast Asia (SEA).  The majority of the population in Southeast Asian countries owns a Smartphone already.

Lets take a look at how smartphone growth has been in SEA region.

Facts and Figures About Smartphone Growth in Southeast Asia

To quote one specific country, India has emerged as a lucrative market. In the recent quarter, an increment of 17 percent was recorded year-on-year. Not only that, IDC also reported that sales in Southeast Asia have risen 6.5 percent year-on-year. The numbers might seem small compared to the population of India but the upward movement is still evident.

Countries in the SEA region tracked by International Data Corporation’s (IDC) local and regional analysts are Indonesia, Malaysia, Myanmar, Philippines, Singapore, Thailand and Vietnam. The cumulative population of the region amounts to a massive total of 600 million where 100 million smartphone sales were recorded in its seven largest countries. The sales touched 28 million in Q2 2016, an increment of 18.1 percent from the previous quarter.

Indonesia accounted for 29 percent of the sales in 2015, making it the largest market. Thailand and Philippines followed with 22 and 14 percent respectively in the same year. 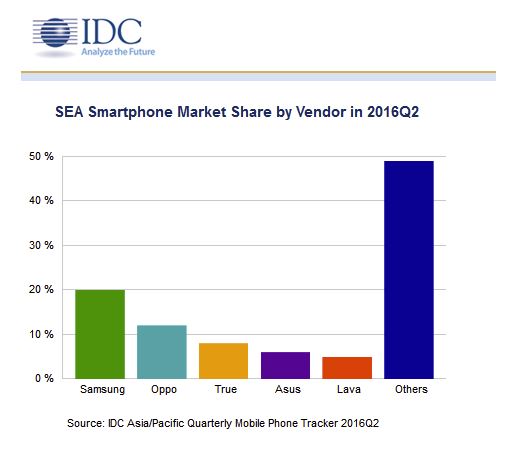 The market share was dominated by Samsung, followed by Oppo, True (an operator in Thailand), Asus and Lava.

Despite throwing money on marketing in the region, Oppo was still outshined by Samsung. However, Oppo now occupies second position in the Southest Asian market for the first time.

Samsung’s Galaxy J series proved to be highly suited for the SEA’s budget conscious market. Asus’s position was maintained due to its highly affordable Zenfone Go model. True and Lava’s unit shipment were propelled by heavy operator activities in Thailand to increase the 3G subscribers nationwide. 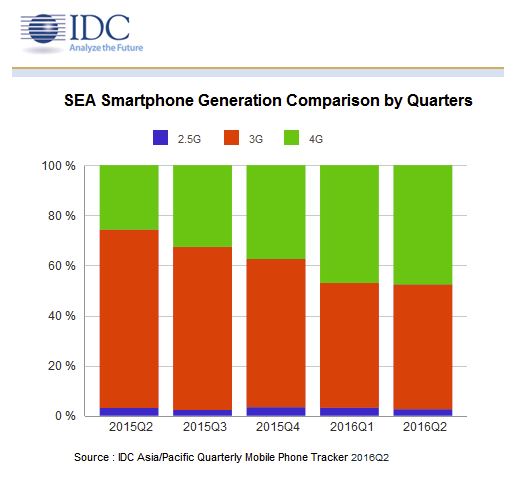 Where the rest of the regions explore the 4G world, 3G remained an integral part of the Southeast Asia market. It can be argued that Thailand is part of the reason why since the operators there are still migrating from the 2G network to 3G.

“With the rise of replacement users in SEA seeking to upgrade their handsets in order to cope with the latest usage and apps, vendors will need to increase the market availability of handsets with better specs that come at slightly higher prices, which the buyers are willing to invest in for a better usage experience.”

Given that 3.8 million people came online for the first time in the Southeast Asia region each month, it remains a lucrative market with high potential regardless of the slow growth.

Growth is slower in Southeast Asia, but the longer term potential is high. Earlier this year, a report co-authored by Google and Temasek found that 3.8 million people come online for the first time in the region each month.

Mobile is the primary access platform, and IDC foresees that over time more expensive devices will see sales grow as those new internet users seek to upgrade their smartphone.