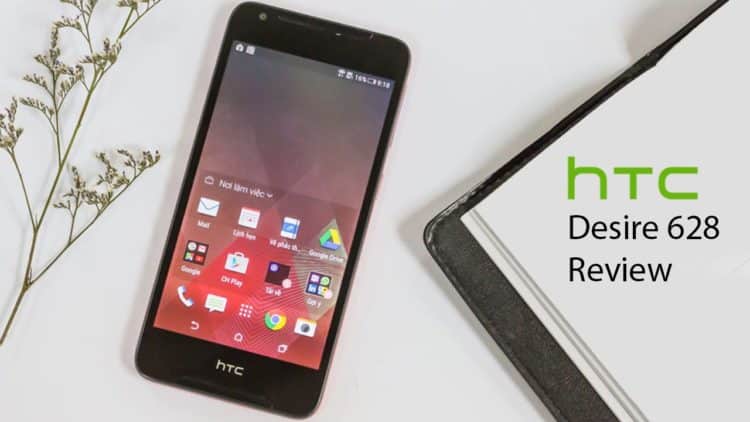 HTC Pakistan recently unveiled its Smartphones lineup in local market with Desire branded midrangers. One of the launched smartphones include a 5-inch device, the Desire 628 Dual SIM.

With Desire 628 HTC isn’t trying to reinvent the wheel, instead it’s a typical midranger with a decent build and plenty of power under the hood.

We recently performed an unboxing of the HTC Desire 628 and expressed our first impressions regarding the device.

In our short time with the device back then, we had found the HTC Desire 628 to be well-worth the look and the additional freebies, that came with package, made the device seem like a very good buy.

Now, since we have spent some more time with the device, let’s take a more detailed look at everything good and bad about HTC’s new midrange champ.

HTC 628 speaks the same design language that the company has been using for most of its Desire midrangers.

The phone’s design doesn’t look from the heavens but HTC has tried to stay unique, given the similar designs on most of its competitors. The color combinations, however, do give out a youthful vibe to HTC Desire 628.

HTC used a glossy plastic material at the back and a similar colored panel at the front. Sandwiched between the two is an accent colored layer.

The design and build is refreshing, despite being plastic, it doesn’t feel cheap. The slightly heavier weight also helps the device feel better in the hand.

However, if you have small hands or you tend to sweat a lot, the phone can become hard to grip in only a few minutes. The glossy back is very slippery and similar plastic sides don’t help either.

When looking at the front of the device, you get a clean and symmetrical design. The top and bottom bezels, which are fairly large considering the lack on capacitive keys and fingerprint scanner, are of equal sizes.

One side of the HTC Desire 628 comes with the volume rocker and the power button, both nicely placed. Though the difference in button materials doesn’t look very good. The other side of the phone has an easily accessible flap, providing access to the two nano-SIM slots and the microSD card (up to 2TB) slot.

The company opted for a non-removable back, so users won’t be able to replace the battery. Rest of the back on HTC Desire 628 is pretty bland and there only a 13MP camera sitting at one corner alongside an LED flash.

The bottom of the phone features a microUSB 2.0 slot for charging and data transfer while the 3.5mm headphone jack can be found at the top.

To sum up the design, we can say that the device is built very well and does look good but the relatively average bezel sizes, use of glossy plastic and lack of color options could mean that the buyer would have to make several compromises if they prefer a slightly premium design.

Of course, you would still be getting a unique design with color options that have gone extinct in recent times. 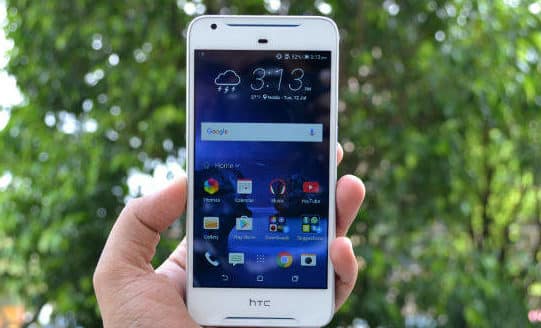 The Desire 628 has a 5 inch 720p display with an IPS panel. Considering the screen size, 720p is sufficient, resulting in 294PPI (pixels per inch), which should prove to be adequately sharp. Unless you have a 5-inch display with a 1080p resolution lying around, you won’t notice the slightly low pixel density.

However, one factor which is clearly evident is the screen’s low brightness. You might not notice it indoors but when using the device under direct sunlight, you will notice that it is quite difficult to make out text on the screen. You can still navigate the phone but reading would be a slightly tough job. When viewed at an angle as well, the brightness sees a large drop.

To top it off, the screen is quite reflective so outdoor visibility definitely gets a low score here. However, when compared with the likes of similarly priced Qmobiles and Samsungs, you will get a similar display quality. So it’s not a complete put-off and you can say it is, at best, mediocre.

HTC has always opted to heavily skin its UI over the vanilla Android variant. The Desire 628 gets Sense 7.0 out of the box which runs atop Android 5.1.1 Lollipop.

While HTC has incorporated loads of features into the UI, the older android version is a major bummer. With Android 7.0 Nougat setting the standards, HTC should have at least gone for Android Marshmallow.

As far as the UI is concerned, it’s very simple and easy to navigate. It is also quite stable, much more than any local OEM’s take on Android.

You get loads of features like a dedicated Car Mode, which prevents the driver from focusing on the phone while driving, a battery saver mode, which can help your device much longer when active, and several other HTC baked software features which make the smartphone experience much smoother.

We found a couple of issues that HTC needs to resolve in future updates. One is that only the bottom speaker works despite there being two at the front. Secondly, OTG support will be a welcome addition.

When it comes to the hardware residing inside the Desire 628, HTC has done a good job. As far as the spec sheet goes the 64-bit MediaTek MT6753 octa-core SoC, clocked at 1.3Ghz, and the 3 gigs of RAM present a really good picture.

HTC also put in a large 32GB of built-in storage chip which is more than what you usually get at this price range.

The SOC can definitely compete with several of the locally available OEMs. When running an Antutu benchmark, Desire 628 was able to churn out a score of 36.748. It may not be able to compete with Qualcomm’s Snapdragon 616, but it is definitely better than a Snapdragon 410. You could say Desire 628’s benchmarks lie somewhere between the two Snapdragon chipsets.

In terms of real-world performance, the 3GB of RAM definitely shows its strength, though the year old midrange chipset does take some time when launching slightly heavy applications.

When gaming, you are covered by a Mali T720, which can handle even the most graphic intensive games. Having that extra RAM also helps in that regard.

The chipset may not be future-proof, but at present, it is more than sufficient to handle anything you throw at it. Games like Asphalt 8 get good frames per second though the chipset goes into overdrive to give you that performance and the temperature of the device rises. Under normal usage though, you wont feel any hiccups or overheating issues.

HTC Desire 628 comes with a 13MP rear shooter, with an f/2.2 aperture, and a 5MP front camera. As far as specs go, both cameras seem to have decent number of pixels under their belt. However, the results aren’t as inspiring as we thought. 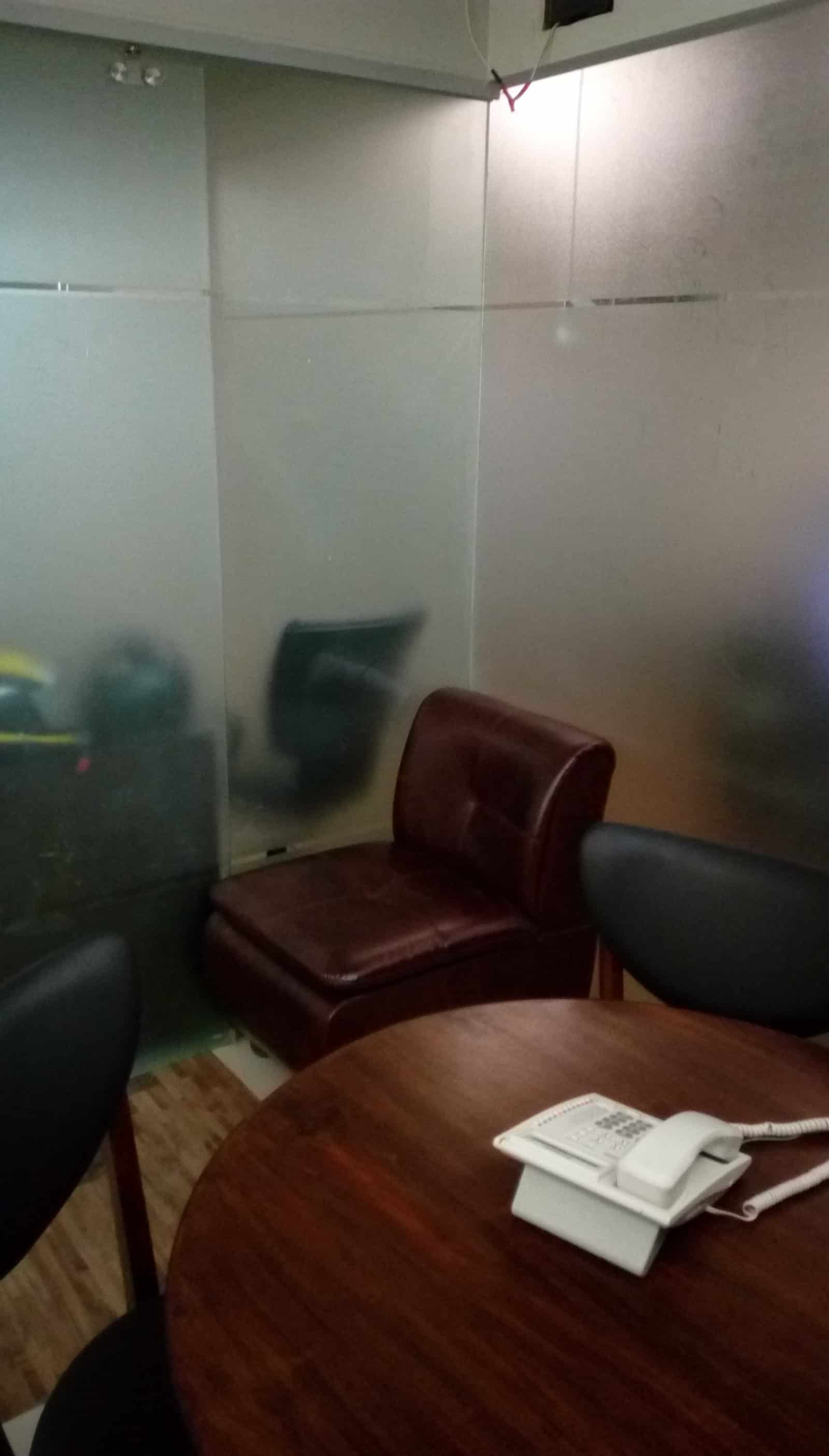 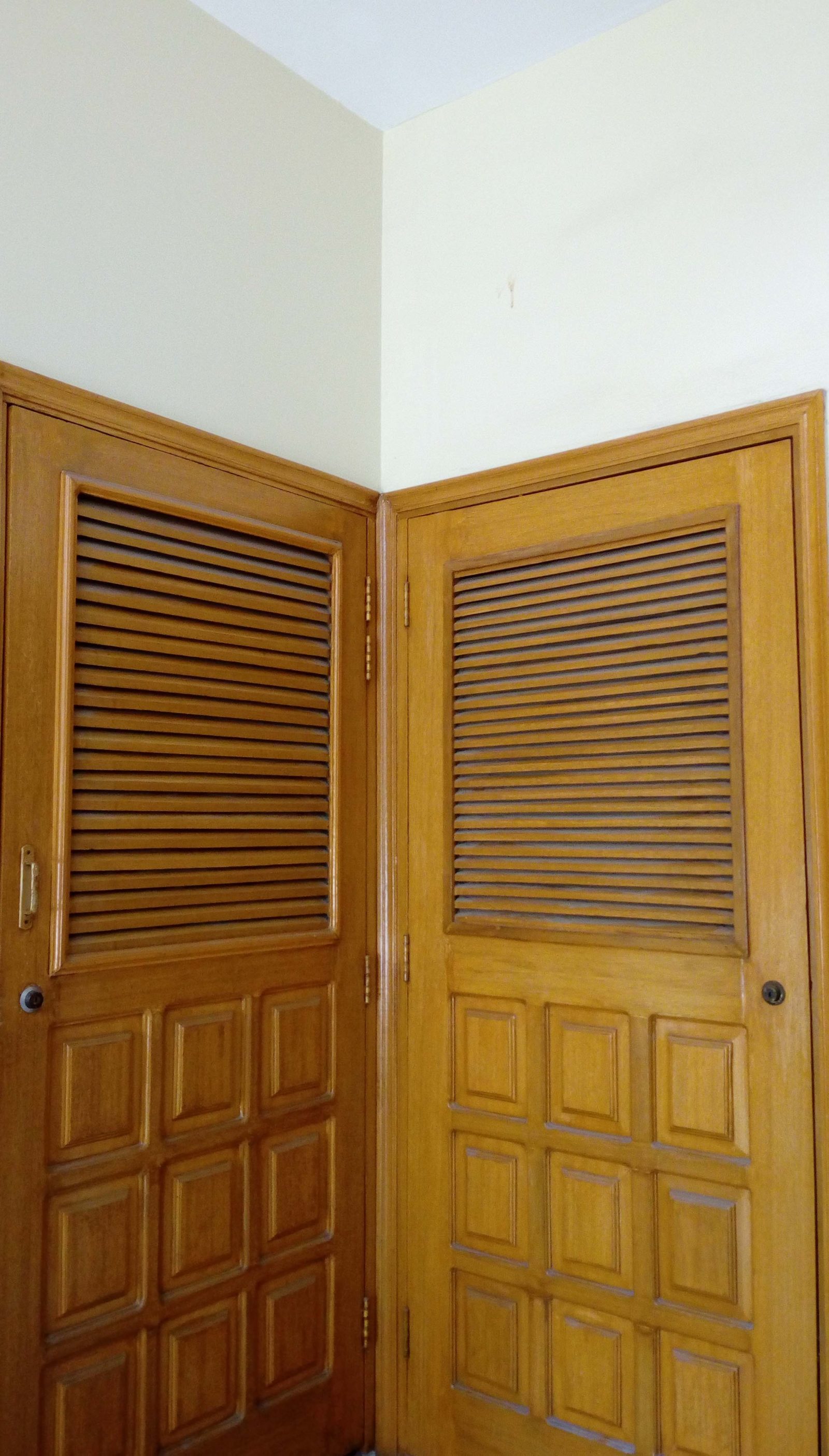 Desire 628 does resolve go0d amount of details when taking pictures indoors. The colors are pleasant, accurate and the exposure seems fine too.

However, when zoomed in, you can notice loads of noise. The noise isn’t visible unless you zoom in, but in case you are planning on viewing images on a big screen, the noise would be easily visible. 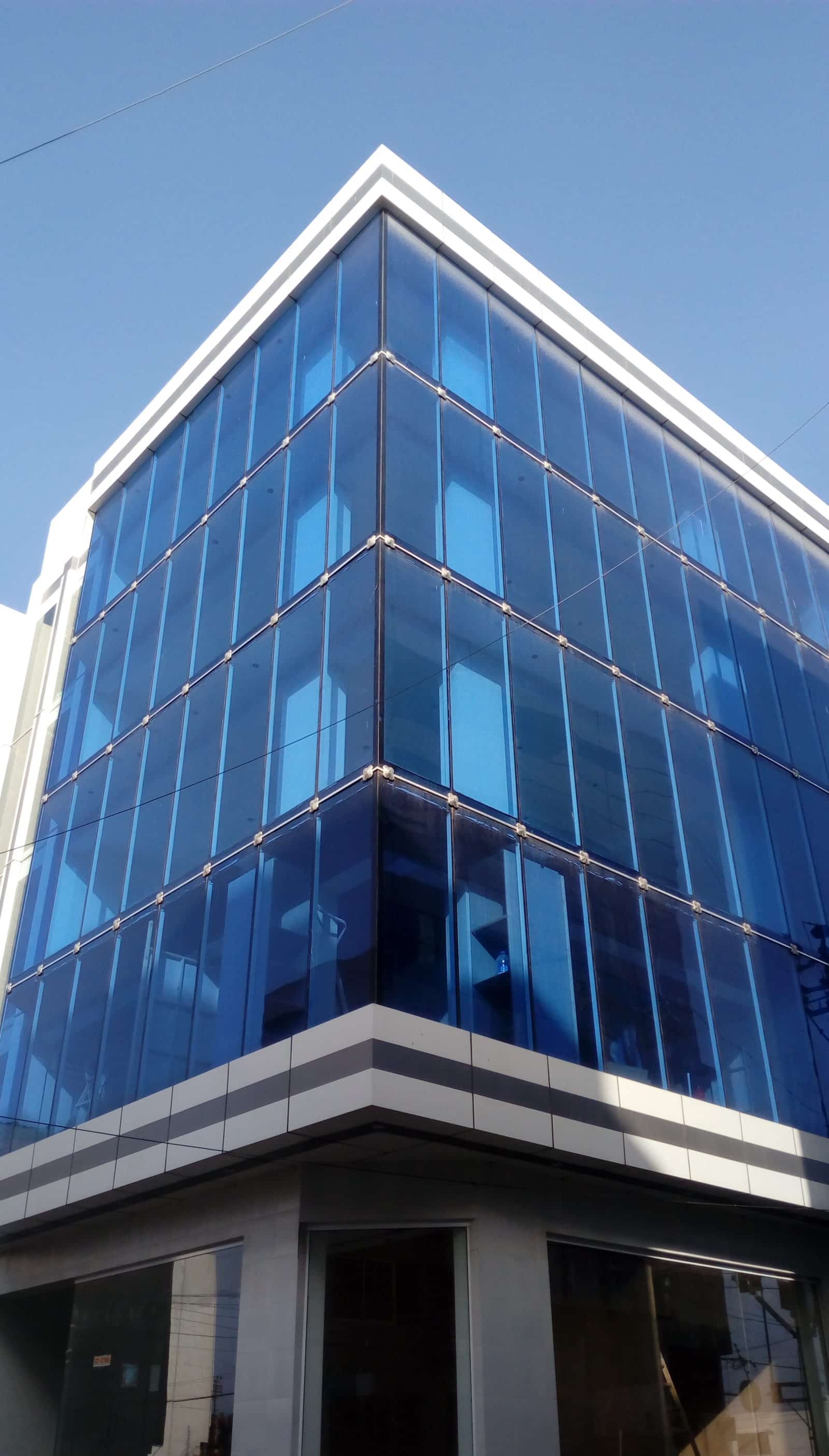 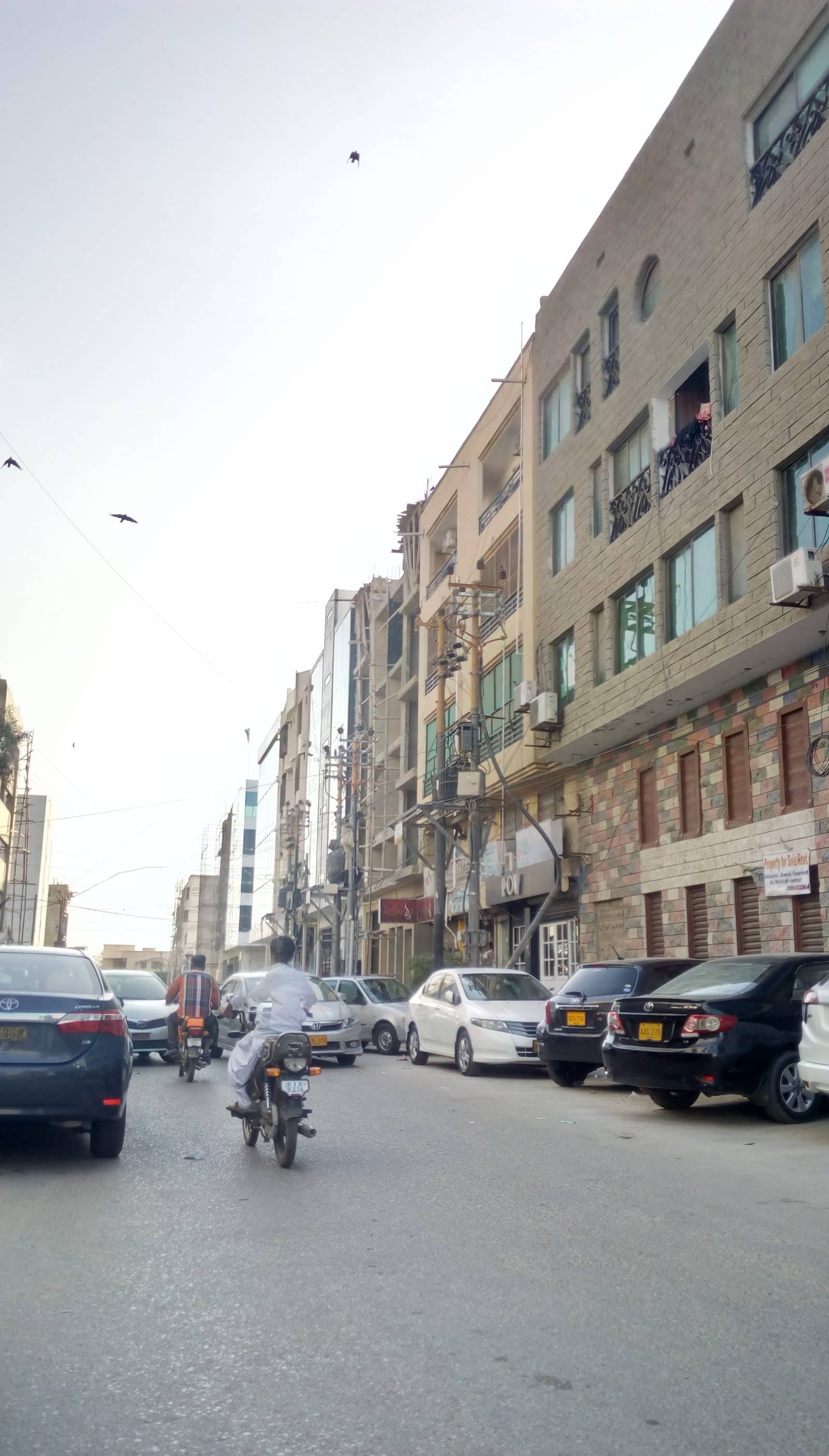 In good lighting, the outdoor shots come out really good. Even the amount of noise is far less than what you get indoors. Though, noise is still present and can be noticed when zoomed in at 2x or more. 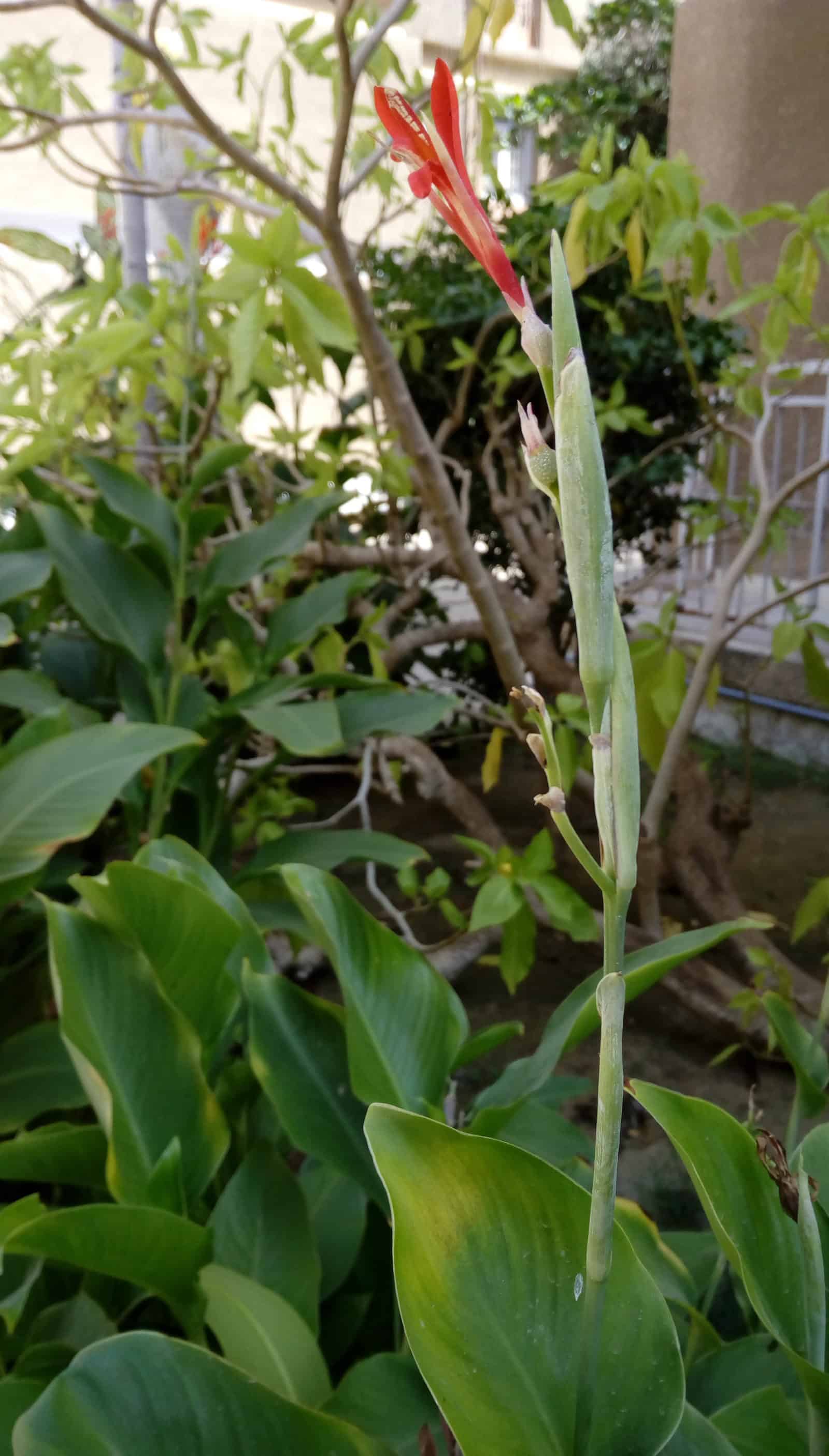 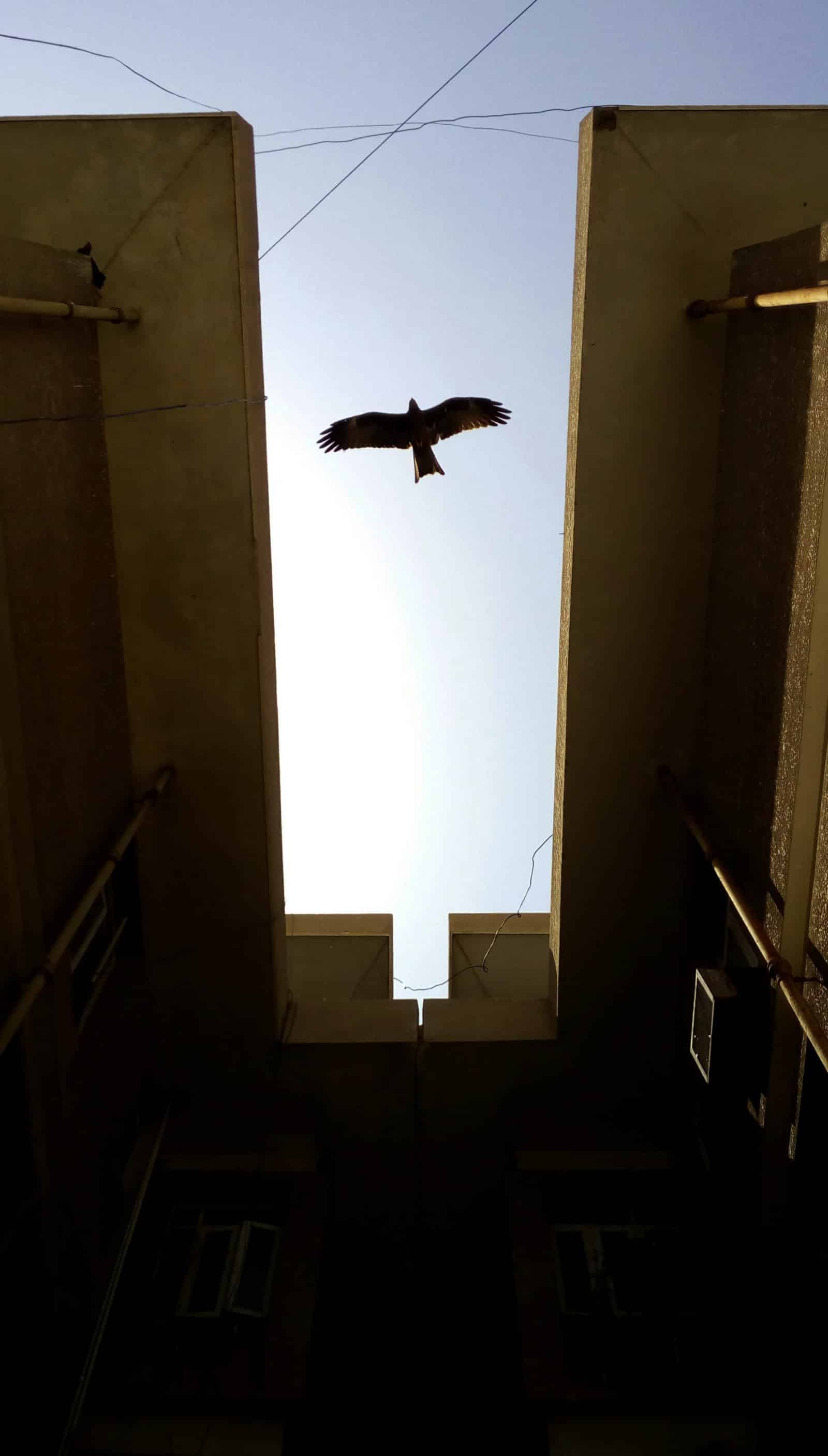 One more thing you’ll notice is that the camera suffers in dark areas of an image. The shadows come out very dark while the camera usually bows out the highlights.

Fortunately, HTC has an HDR mode which can rescue you in shots which are otherwise less than mediocre. With HDR on, the photos come out with more detail in both the shadows and the highlights. The algorithm works really well and improves the image quality by a lot. The noise is still present though and the HDR images do take a second or two to save. 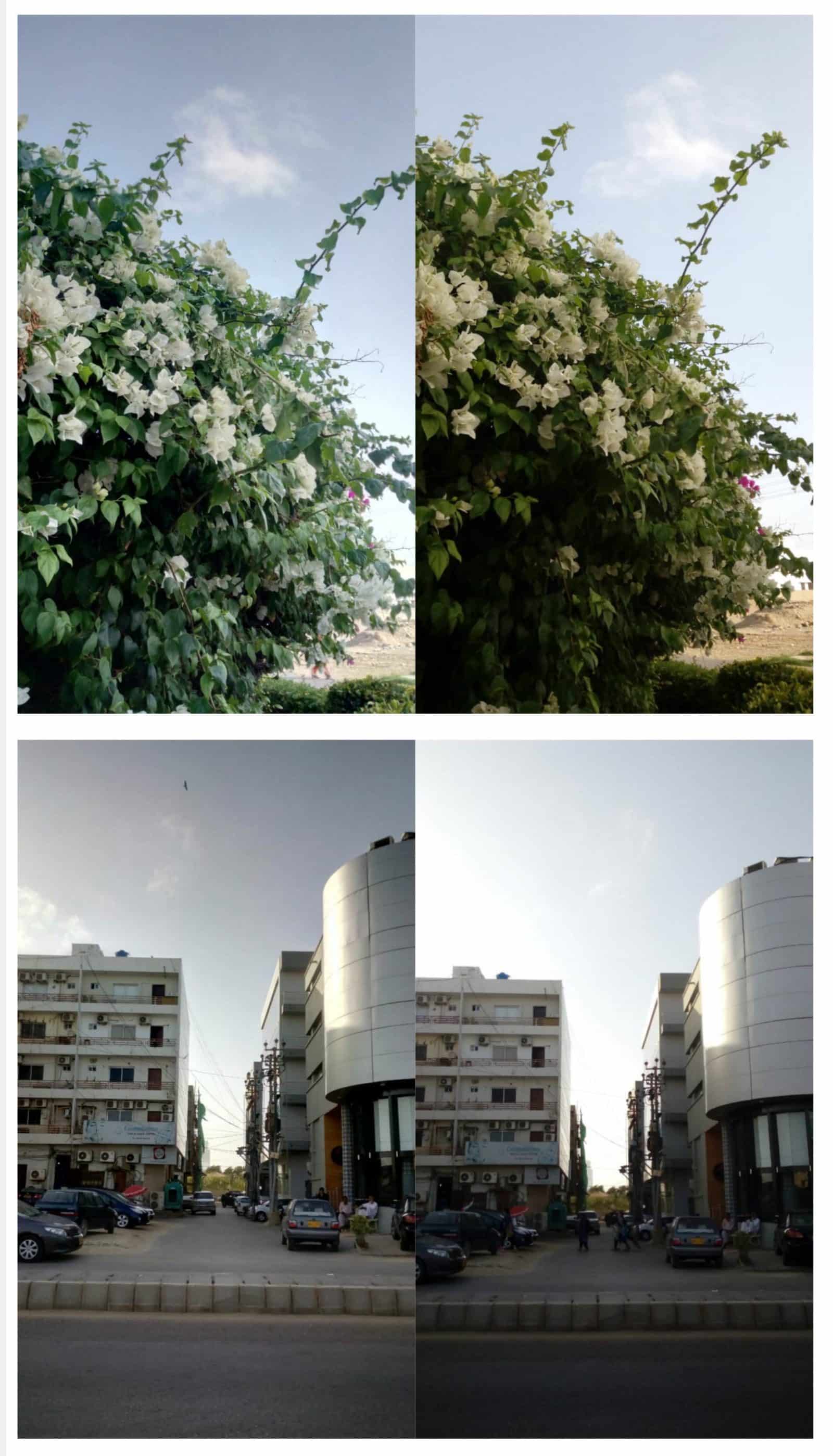 One issue we noticed with the HDR camera is that it tends to implement a blueish shade. Its not that noticeable unless you compare with the normal photos but the coolish tint does ruin the realistic colours.

As we move towards slightly darker scenes or some low light photography, the camera quickly becomes a noise house.

You get little detail and the images are more noise and less quality. However, it’s pretty common in this price range and you usually get similar or worse quality from most of the Desire 628’s competitors.

The flash works really well over short distances and while the noise is still high, you get loads of detail in shots where flash is turned on. Our recommendation is to keep it on when you are taking pictures in low light conditions.

Video results aren’t much different from the still image ones. Videos contain plenty of noise but there’s enough detail too. The amount of detail isn’t as good as the images though since you’re stuck with 1080 at most. Not that many midrangers over 4K recording, but having the option would have been a plus.

The lack of OIS is also felt while recording videos, however, once again, its not something you usually get in this price range.

Battery performance could be the Achilles heel for Desire 628. Real world tests showed that the device has good standby times but when you start using it, the battery drains fast.

Under normal usage, which includes browsing using social media and taking some pictures, the HTC Desire’s battery would lasts till evening.

You could get longer battery times by decreasing brightness or keeping your data off when not in use.

WiFi didn’t drain battery much and you could easily browse for longer duration while being on WiFi.

Usual calling and texting doesn’t touch the battery, so if you are a long-caller, you wouldn’t be seeing any issues at all.

Where it struggles is battery life, screen brightness and low-light photography. Given the number of freebies on offer, the Desire 628 seems like a very good buy.

Considering all aspects, we’d say it is a decent performer and better than most local OEMs. HTC might even be able to take some market share from the likes of Huawei, Samsung and Qmobile, which offer inferior devices at these prices.

If you have a habit of dropping your phone, its best you get Desire 628 since it comes with Damage Protection Warranty.

For details regarding the the freebies that come with the Desire 628 click here.