India whipped up a war hysteria following the attack on a military barrack in Uri on September 29th. The Indian media and intelligentsia started to point fingers at Pakistan without any proof. The media there went into an overdrive, calling for waging a war against its Western neighbor.

Following a spate of fake news (which have been exposed as lies by observers and experts, much to India’s embarrassment), it seems that India is now getting desperate.

First it tried to think up of ways to block Pakistan’s water supplies. But the Pakistani leadership caught its bluff.

Unable to think clearly, the Indian showbiz industry has united with its government and has recently took the decision to send Pakistani celebrities back home who had been working with the Indian showbiz industry. Indian Motion Picture Producers Association (IMPPA) passed the resolution which banned personalities like Rahat Fateh Ali Khan, Fawad Khan, Ali Zafar and Mahira Khan.

In response to this, Pakistani cinemas have also decided to ban the screening of Indian movies, with the Pakistani film industry throwing its support behind the cause as well.

Pakistan Responds to the Media War

To support Pakistan in such testing times, the country’s cinema industry has decided to take the initial step and react to cross-border developments by boycotting the exhibition of Indian films across the country.

The decision was confirmed by Khorem Gultasab, General Manager Super Cinema Pvt Limited — One of the largest cinema operators in Pakistan.

His statement was posted on his official Facebook page:

“In Solidarity with Pakistan Army and our film actors, Super Cinemas being one of the largest Cinema operators in Pakistan hereby announce boycotting exhibition of Indian films at all our Cinemas with immediate effect for an indefinite period. We expect other cinemas to follow the suit. We urge all concerned to ban Indian content on all Pakistan TV Channels / Cable TV as well.

It must also be ensured that sale of Indian Film DVDs/CDs is also stopped at outlets in Pakistan. This protest will continue till Pak-India situation normalizes and Indian Govt offers a level playing field for Pakistani films and complete protection to Pakistani artists. “

Not long after, Nueplex Cinemas also released the following statement: 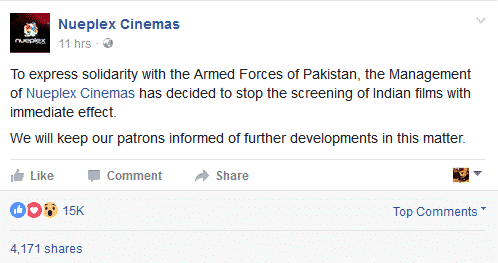 Hamza Ali Abbasi also lauded this step on his Facebook profile. The actor / social media activist has never shied away from speaking his mind, more recently on the atrocities committed by Indian army against defenseless Kashmiris.

What Does This Step Mean for the Pakistani Film Industry?

With aims to destabilize India’s revenue stream and support Pakistan’s army and showbiz stars, this action will prove to be a blessing in disguise for Pakistan Cinema industry.

A report generated to measure the movie popularity by sales on Eid ul Azha showed a remarkable stat; Pakistan’s latest entry of Actor In Law featuring Fahad Mustafa attracted 60 percent of the crowd compared to 1 percent for the India’s Baar Baar Dekho.

This survey gives Pakistani cinema industry more incentive than ever to try to capture the Pakistani market. Stakeholders should capitalize on this opportunity by bringing the quality of movies up, with better production values, better stories and entertainment.