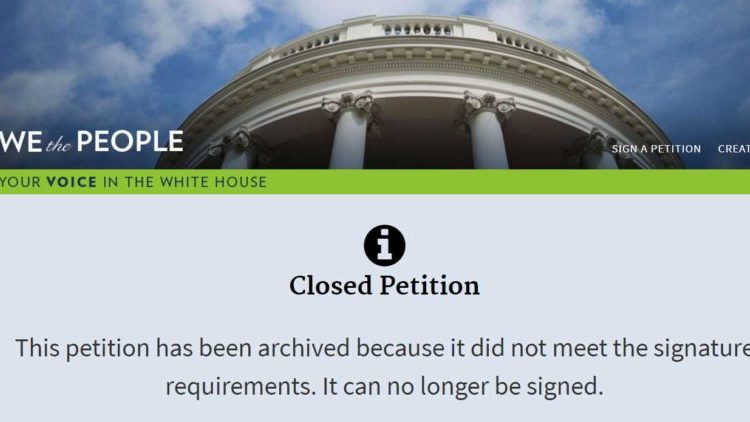 Amongst the heated cross border relations between Pakistan and India, people belonging to both countries launched a petition throughthe White House petition website against each other.

Once a petition is launched and gathers over 100,000 signatures in its support within a month, the White House is supposed to respond to it within 60 days.

Indian supporters launched the petition “We the People ask the Administration to declare Pakistan, State Sponsor of Terrorism” on 21 September.

The petition quickly gathered support and reached the minimum quota within a week. However, despite India’s very large population, the petition gathered 642,541 supporters only, which, as it turns out, were also fake.

The website has archived the Indian petition because it did not comply with the platform’s signature guidelines. The petition has in turn been closed and can no longer be signed. There are no details on whether the petition has been nullified despite meeting the minimum.

You can see a screenshot of the petition page below or visit the page here:

It seems, in order to gain large amounts of signatures, some Indian supporters faked signatures by changing IPs and email addresses. The fraudulent activity was picked up by “We the People” and it responded by closing the petition resulting in global insult as India had been making a big news out of the massive support it got for the petition.

Pakistanis also launched a petition titled “Republic of India is involved in spreading terrorism in Pakistan and should be declared a terrorist state for this.” On 27th September. The petition has gathered 67,734 votes at the time of writing.

The petition says that India orchestrates terrorism in Balochistan and FATA clear evidence goes against all Indian denials of the proxy war. Kalboshan Yadev, an Indian spy working for the Research and Analysis Wing (RAW) has accepted that he is a serving Commander in Indian Navy and has been working on espionage and sabotage missions. He also accepted aiding TTP, Al-Qaida and ISIS, which according to the petition, is enough to declare Indian as a terrorist state.

Indian supporters have also launched a petition in the British parliament. However, Sikhs from Indian Punjab have successfully launched and filed a petition at the US website in support of Khalistan, a new country between Pakistan and India, achieving its 100,000 supporter goal.

Meanwhile, Pakistani Kashmiris have also launched a petition in British parliament asking for their support against Indian mutiny in Jammu & Kashmir.

We ask our readers to share this article and support the Pakistani petitions especially the Kashmiris by signing the petition in British parliament until it reaches 100,000 signatures. You can also help the other petition against India to cross the minimum threshold.