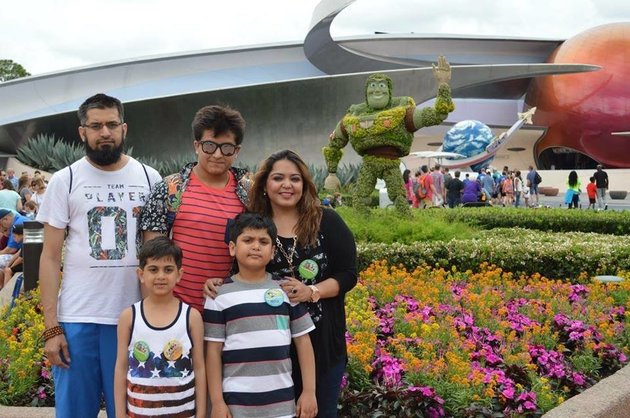 US Presidential candidate Donald Trump, in order to appeal to the lowest common denominator of the country, mocked and toyed with Islam in his campaign and debates. Now, the same hatred-laden speeches are taking their toll in American society.

Though hate crimes have been going on in America for a while now, every now or then a story shocks us to the core with its cruelty and vileness.

Here is the story of a 7-year old Muslim boy who has been bruised and injured in Cary, the largest municipality in North Carolina, USA and that too outside his very own apartment building.

Why? Because he wouldn’t eat haraam food which his class fellow was forcing down his throat.

Abdul Aziz, a fifth grader, refused and paid the price. The classmates ganged up on him and kicked him while calling him “Muslim” as an insult, over and over while twisting his arm.

Abdul Aziz is the son of Zeeshan-ul-Hassan Usmani, the data scientist and IT pioneer who developed PredictifyMe, a system that predicts where the next terrorist attack is likely to happen. Talk about a cruel twist of irony.

The family of Zeeshan-ul-Hassan Usmani has since then left U.S. and moved back to Pakistan to avoid future drama. The parents, Usmani and Binish Bhagwanee, of three innocent boys, told a media outlet that they couldn’t risk the life of their children by staying in the U.S.

Upon their return to Pakistan, a U.S. based newspaper took notice of the incident and conducted an interview via Skype. Usmani said of his son,

“It’s very heartbreaking and sad,” said Usmani. “It’s not the America we know about, care about and want to live in.”

Usmani is a two times Fullbright Scholar who analyzed big data to prevent terror attacks. He is just like any other computer scientist, who has also won several awards in his field.

Their youngest son was not the only one was exposed to the hideous racial slurs. Their middle son, 8-years old, experienced something similar. He informed his parents that his classmates called his father, Usmani, a terrorist because he was a Pakistani with a beard.

“He asked me if I was a terrorist,” Usmani recalled. After that, Bhagwanee asked him not to go to the school anymore, “just so my children would not face any discrimination because of my face.”

Usmani’s oldest son, 14, once brought a knife into the school premises because of which he was suspended for six months from the school. Following the trend, he was the only one punished because he was Muslim. Slurs such as ISIS and terrorist were thrown towards him, scarring him for life. The school went on lockdown, Usmani added.

Things weren’t just awful at school for his children but also where the family resided. Usmani informed that one of his neighbors kept harassing with expletives. His wife was also threatened.

“He came to our apartment twice at midnight and at 2:00 AM, passing racial slurs, teaching us how to ‘behave’ and “’live in this country,’ mentioning Donald Trump and his desire to vote for him to kick us out of this country,” Usmani’s words in an email to the local police of Cary.

The neighbor did move away and the Cary Police Department proved to be of much help, he added.

Another incident Usmani mentioned was of the Iraq War veteran Russell Thomas Langford. He, Russell, came outside the mosque where Usmani and his sons go to pray and threatened to kill all of the Muslims inside and bury them behind the mosque. Usmani said that although he and his sons were not at the mosque that particular day, it was still a traumatizing incident which shook things in the community.

There have been countless incidents, according to Usmani which has made their living in the States near impossible. A man, whose life was dedicated to saving American lives, was mistreated and saw his family suffer all because a America is becoming intolerant towards immigrants who just want to serve their country as best as they could.