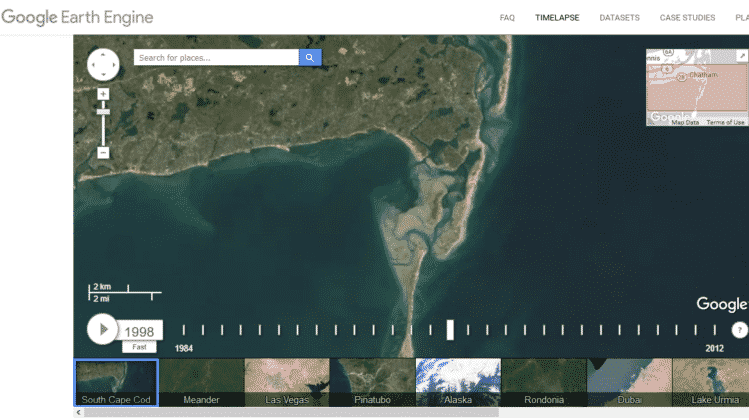 Google Earth is nothing new. The web app has been around for several years. It lets you look at a huge 1.7 terapixel image of our planet from anywhere you want to.

It has been subject to changes over time with the addition of Street View. Street View further enhanced the Google Earth experience by letting you look at various places in 3d instead of a flat image. You could also look at it in real time, see the people move about.

Now it seems that Google Earth is adding a new feature. You can now use it to see a location and view its progress over the years via ‘Timelapse’.

Timelapse as the name suggests, lets you look at various cities and places all over the Earth over a period of time. The period is however limited from 1984 to 2012.

You can either view the images one by one using the slider or let it run like a video to show changes over time.

The video has one frame per year. Each frame is a 1.7-terapixel snapshot of the entire Earth, generated from 30-meter resolution Landsat images. Landsat collects new imagery over each location in the world about once every two weeks. Using Earth Engine’s analysis platform, each year’s worth of images was combined into a single cloud-free, per-pixel composite for that year.

Interestingly Islamabad doesn’t see a change until late in the 90’s, at least from the satellite’s perspective.

As you can see, it doesn’t start changing until 1999. This may be due to a lack of satellite imagery in that area before 1999, though your guess is as good as ours.

Compare that with the city of Las Vegas in US and the change is massive:

Nevertheless, Google Earth Timelapse is an interesting tool which can be used in different ways. It may be used in a documentary on global warming, or to document a city’s growth over the years. The applications are limitless to say the least.