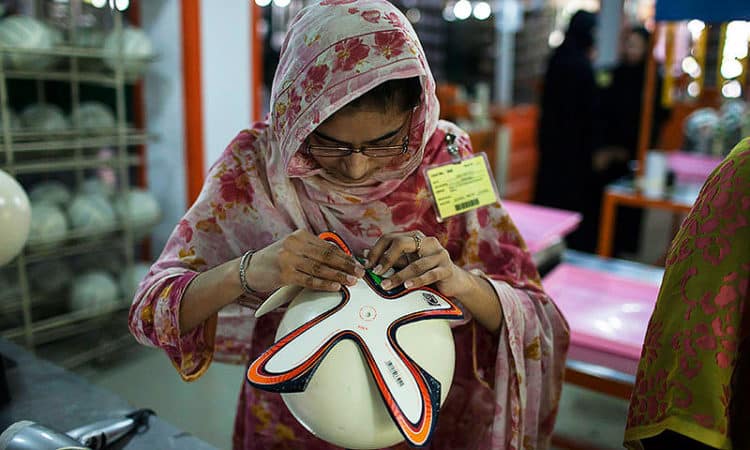 Sialkot is the main hub for sports goods in Pakistan. These goods are used locally and exported if need be. Sialkot-made footballs have been used in major events such as 2014 FIFA World Cup, the most memorable international footballing event. The name of the ball was Brazuca, which was used specially in event’s finals.

Khawaja Masood Akhtar is the owner of the factory which exported the Brazuca balls. He explains that blaming the government for lack of jobs and failed ventures are mere lame excuses. According to him, any half-decent entrepreneur is capable of finding solution to problems which lie right in front of us.

Instead of waiting for the government to take the initiative and forming a local infrastructure, businessmen of Sialkot took it upon themselves to do so. The Chamber of Commerce was responsible for setting up country’s first dry port, privately financed. The goods at this port can be clear of the customs before they are shipped to a conventional port.

This lead to local businesses investing in the construction of the city’s airport. This airport is Pakistan’s first and only privately owned airport. The airport handles  53 flights a week. It helped in attracting foreign interest even further.

Significant things which matter the most while sustaining a successful business, in relation to Mr. Akhtar’s company, are as following:

First and foremost, no business can be successful if no hard work has been put in. It varies from initiating the venture to finding investment and investors. Thriving to become the best is an ideology. Ideology, or idea, can never materialize if no effort has been put in to implement them.

Pakistan has been the focal point of various tragedies which has disrupted the entire system. The terrorist attack on Sri Lankan team, when they came to Pakistan to play a series, set back the country and its sports. The international image of Pakistan was completely destroyed which has since then, taken a lot of time to rebuild. Mr. Akhtar indicates that struggle always remains while sustaining a business. Factors which are out of our hands cannot be accounted for hence can only be endured.

Struggle is constant and is generally influenced by outside factors. However, what you can control is quality. Sialkot is famous for its sporting goods because of its quality. The city’s 8,000-member chamber of commerce states that Sialkot exported $2bn-worth of goods last year, or 9% of the country’s total exports of $22bn. Numbers as high as that are only possible if your products are up to the mark.

Mr. Akhtar has had luck working in his favor, too, along the years. Residing in the market which is globally recognized for sporting goods plays in his favor. Pakistan have exported millions of dollars of goods which have been used in international events.

As talked earlier, quality is crucial. Sialkot based companies lost a lot of business after failing to anticipate the migration of badminton rackets from wood to graphite and aluminum.

After set backs, as mentioned above, it is essential to be committed to get back up once again. Improving the goods, equipping them with latest technologies and ensuring the originality remains is essential.

Technology has proved essential in the modern world. Sialkot’s community is now gunning to establish a tech university which will boost the ventures and help deploy tech-savvy people in the field which will improve the organizations.