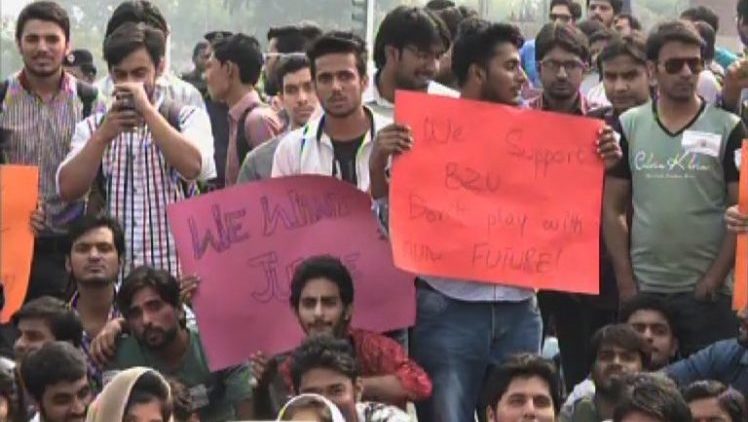 Students from Bahauddin Zakariya University (BZU), from Lahore campus, were seen protesting in open on roads of Lahore.

They were protesting against the administration of the main campus of BZU, which is headquartered in Multan, for not awarding them their degrees. The students chanted slogans and said that they will not move from the road (Canal road) and will continue the protest overnight if they have to.

Senior officials from the Higher Education Department had a meeting with the protesting students but they still continued to protest, chant slogans and demand their degrees.

The Lahore campus of the BZU was established as a public-private partnership originally. Later a controversy came up regarding the legality of the Lahore campus with regards to awarding degrees. Higher Education Department, after getting approval from the BZU Multan campus, the main branch, granted a one-time relaxation to the Lahore campus to issue degrees.

During this time, the Lahore campus was allowed to complete the remaining classes and was told not to entertain any new admissions that they get.

The secretary said that he had talked with the Vice Chancellor and he will be arriving on Wednesday (today).

Due to the protests, the daily transportation has suffered greatly at the Canal road and the students are still continuing to protest against the university administration. Medical students earlier were also protesting against a similar issue, it seems like issues of this sort are becoming more and more common each day.