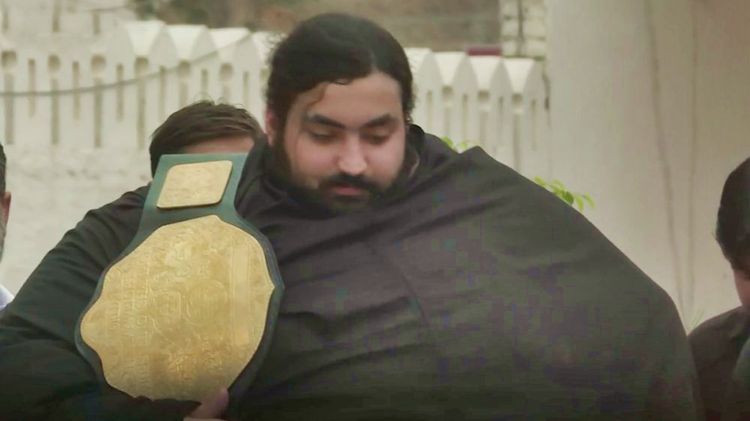 If you have been active on social media, there’s no doubt you must have heard of Khizar Hayat Khan, otherwise known as the Pakistani Hulk (a fictional character from Marvel Comics).

People from his village in Mardan often refer to him as Khan Baba.

The guy seems to have gained international fame now thanks to his “outstanding” physique.

Khizar weighs an unbelievable 436 kilograms (yes, no typos there!) and he is still only 24 years old. He claims to be the strongest man in Pakistan and challenges anyone to come and defeat him in a bout.

He takes 10,000 calories a day. His daily intake includes a buffet of 4 whole chickens, 5 dozen eggs and 5 litres of milk.

Khizar wishes to become an international professional wrestler. To do that, the heavy weightlifter aims to increase his own weight (and size) even further. He wants to be a part of WWE as soon as 2017.

The news has even reached WWE in the US and they say they have announced no plans as of yet to bring him in. But you never know, one of these days it might just come true.

A European site, Radio Free Europe Radio Liberty (RFE/RL), covered Khizar and since then he has become an internet sensation around the world.

Meanwhile you can take a look at the Pakistani Hulk below (courtesy of RFE/RL):

Unfortunately, instead of being famous, people seem to be making fun of him instead.

Some are saying that unlike Hulk you can’t even see a single developed muscle on this guy.

But instead of becoming discouraged, Khizar has his mind set on realizing his dreams.

We appreciate the guy’s effort because it is not everyone who harbors big ambitions and tries their best to fulfill them, even when people around them serve to discourage and deter them. Khizar is proving to be an exception to that rule.

We hope he turns all that protein to muscle soon and proves everyone wrong while becoming an international celebrity. That alone will be more than enough to shut down his haters.

Thanks to him, there’s renewed international interest in Pashtoon culture. Where most just equate Pakistan with terrorism, tales like those of Khizar’s are helping fight that negative stereotype in numerous ways.

People from all over the world are keeping an eye on Khizar and whether he will be able to live up to his name of the Incredible Pakistani Hulk. Here’s to hoping he faces John Cena one day.