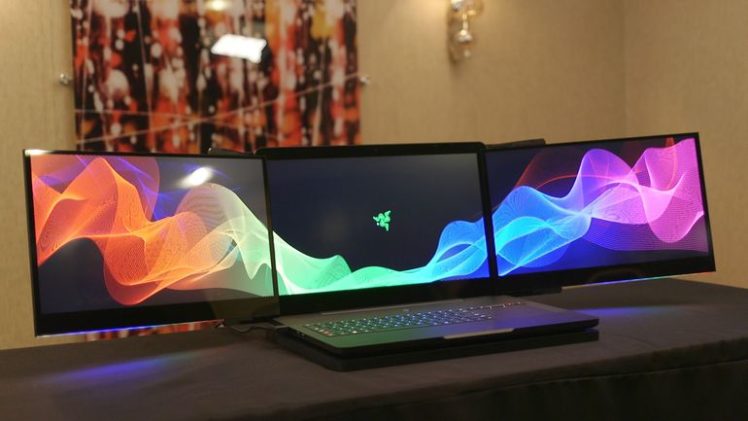 Razer is a well known name in e-sports and the PC world in general. They make gaming peripherals as well as gaming laptops and PCs.

Its a laptop that comes with not one, or two, but three display screens!

Valerie is a step away from Razer’s usual gaming laptop offerings (they’re slimmer and sleek looking). This one is a bulky notebook and that too given its uniqueness.

It comes with 3 screens, thats right, 3 different screens attached to a laptop’s form factor. It is the world’s first triple display laptop ever made.

Project Valerie, as mentioned earlier, is a prototype for now which means it won’t be making its way into customers’ hands any time soon.

Razer did not reveal any detailed specifications about the Valerie. They did however say that the three displays (measuring 17.3 inches each) gets you a massive 12K resolution (11520 x 2160) with all of them combined.

It will come with 32 GB of RAM and the same keyboard as the one present in Razer Blade Pro. It will also feature the same vapor chamber cooling tech included in the Blade Pro as well. There’s been no word on its processor and battery specifications.

It will be powered by an Nvidia GTX 1080 graphics card.

Razer argues that despite having 3 displays in a laptop, its not thicker compared to an average 17.3 inch gaming laptop.

The displays on the left and right are inside the main, center display of the laptop. They slide outwards and lock into place automatically within seconds.

Each of the displays can work independently to allow professionals/graphics designers a desktop-like experience with a portable device. They can also work together to provide a widescreen view of a single application as well (mostly for gaming purposes).

All three displays support Nvidia’s Gsync technology which synchronizes the higher refresh rates of the displays with the frame-rate of a game or whatever is on display at the moment. This reduces input lag in games and is mostly used by gaming enthusiasts.

It also supports Nvidia Surround which gets you a whopping 180 degree field of vision. This technology is for multiple gaming monitors connected together to play a single game. The game will then have a very large field of vision.

Project Valerie is currently a prototype, with no word on pricing as well.