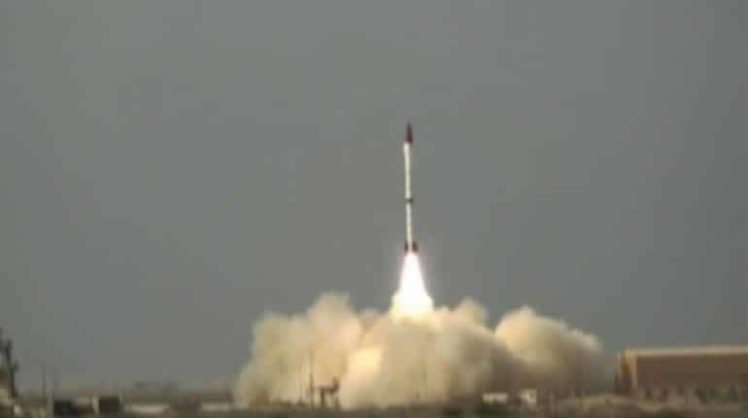 Ababeel is a surface to surface ballistic missile and can reach as far as 2,200 kilometers, almost 3 times the distance between Islamabad and New Delhi.

Ababeel is a reference to the small bird referred to in the Holy Quran. Hordes of these birds aided the Muslims against their enemies by raining down stones on them.

The test flight of the missile was successful, and with it, Pakistan’s offensive and defensive capabilities have been strengthened manifold.

Can Fly Under The Radar

The missile can deliver multiple payloads. It can also work with nuclear warheads and can strike multiple targets at the same time.

According to Inter-Services Public Relations (ISPR) this missile is capable of defeating enemy’s radar system as it targets multiple areas at the same time.

India’s defense system tracks the missiles in the air to intercept them and destroy them before they hit their targets. Ababeel will have multiple warheads which will make it impossible for the Indian defense shield to counter. This is because it will not be able to track the all of the warheads at the same time.

Targets multiple areas, will make it impossible to counter by the enemies

Development of the Ababeel weapon system is aimed at ensuring survivability of Pakistan’s ballistic missiles in the growing regional Ballistic Missile Defence (BMD) environment. This will further reinforce deterrence.

Defense analysts claim that the missile was developed using stealth technology that can help it bypass enemy radar systems.

Earlier Pakistan Navy tested the Babur III Submarine Launched Cruise Missile (SLCM). This missile gives Pakistan a credible “second strike” capability in case the country is attacked. It can carry nuclear warheads as well. The missile has a range of 450 KMs and can strike targets on both land and sea.

Both of these missiles seem to be a response from Pakistan’s side in regards to India’s missile defense shield technology. Independent observers claim that it is too early for India to have this kind of technology which only a few countries in the world currently possess.