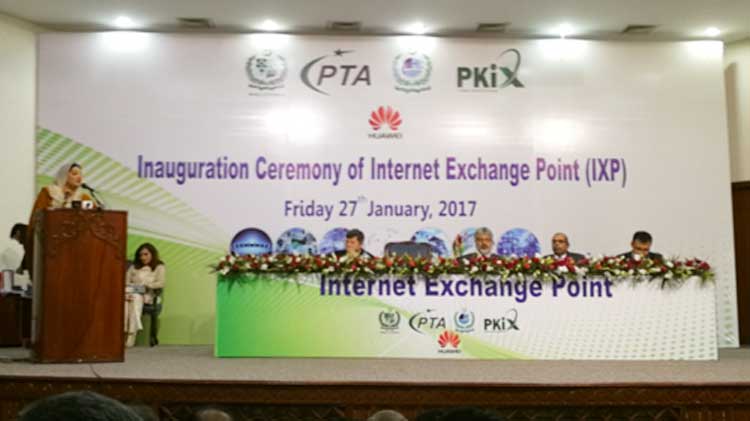 PTA said that at least two more internet exchanges (for Karachi and Lahore) are in pipeline and will be deployed with time.

An inauguration ceremony for IXP was held in Islamabad where Anusha Rehman, Minister for IT and Telecom, was the chief guest. Dr. Ismail Shah, Chairman PTA was host of the event while Dr. Mukhtar Ahmed, Chairman HEC and Country Lead for Huawei Pakistan were also present on stage.

Pakistan Internet Exchange — that was operational for some months now as a pilot — is already joined by eight ISPs and telecom operators.

Current operators include PTCL, Nayalel, Telenor, Wateen, Multinet, Cybernet, Wi-Tribe and PERN, whereas rest of the operators are in process of terminating their fiber.

It was revealed that Pakistan Internet Exchange is already processing 3GBs of data per second while total bandwidth per day reached 3 TBs per day.

Telecom policy 2015, issued by MoIT last year, allowed to develop Internet Exchange with the consultation of all stakeholders.

Under the light of Telecom policy 2015 Telecom industry of Pakistan decided to launch Internet Exchange Point(xP) in Pakistan, to minimize the Internet bandwidth cost and improve quality of Internet Service due to drastic decrease in latency of the local Internet traffic.

PTA took the leading role and started a consultation process with all the stakeholders together to reach a consensus on establishing the first IXP of Pakistan.

International best practices were followed and five working groups were formed having representation from all stakeholders, focusing on all aspect of establishment of IXP for Pakistan.

Working groups recommended to establish IXP at a neutral location in Islamabad, Karachi and Lahore and HEC’s premises was chosen because of their central locations and as a neutral and non-commercial status which was acceptable to all.

A five day workshop was conducted in April 2016, at PTA lslamabad, for the capacity building of Pakistani Internet unity, ISOC and NSRP trainers conducted the training to representatives of all ISPs and mobile phone operators, on commercial and technical aspects of IXP.

PTA didn’t give the timeline for establishment of Lahore and Karachi Internet Exchanges but said that they will be up and running very soon.