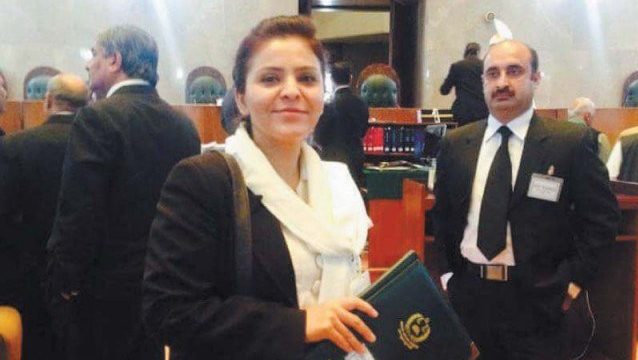 Whatever conservative conceptions you had of the province of Gilgit Baltistan should be removed by now because the region has managed to have its first female judge since 2006. And she is definitely someone you do not want to cross.

Her court is one of the strictest in the region with everyone following the proper decorum at all times. The policemen will straighten their uniforms before entering while lawyers will make sure that they are dressed properly for attendance in her court.

Amina Zamir, a senior Civil Judge in Gahkuch , Ghizer valley of Gilgit Baltistan, fears no one when it comes to the decisions she hands out or the way she holds court.

Lawyers remember the days when Amina Zamir was respected by no one and no one would take her seriously, especially the police officers. However, that changed gradually as people saw that even though she was a woman, her decisions were always just and fair and could be relied upon.

To many she is more than just the first female judge of the region – she is also the reason why more women are being respected in a male-dominated profession and allowed to go further than they had been before.

Living in the Hunza Valley where the literacy rate is almost 100% right now, Zamir completed her LLB from the International Islamic University Islamabad in 2004 and then her LLM in Human Rights by winning the Chevening scholarship through the British Council in 2009.

After her LLB, Zamir went on to secure the top spot in Federal Public Service Commission (FPSC) competitive examinations in 2006 due to which she was appointed as a civil judge in Gilgit Baltistan.

This wasn’t easy since she had to fight resistance from various males in the judiciary and legal fields but she managed to beat all of that when she quickly and firmly handed out decisions for cases that had been left undecided for months or even years. She has an average of discharging about a hundred cases of various backgrounds in a month.

All of this resulted in her appointment as Assistant Registrar in Gilgit’s Chief Court.

Recently she also received the UK Top Alumni Award by British High Commissioner Tom Drew for being an outstanding individual. She was among three others chosen for this from a hundred applicants.

The British Council also revealed that Amina Zamir is linked to several civil society organizations that offer free legal aid to those who need it but cannot afford it.