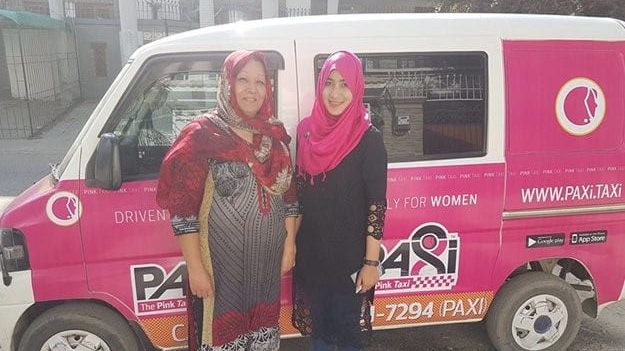 Paxi is launching its women-only taxi rides today in celebration of Women’s Day. It sets itself apart from the competition on two grounds mainly – it’s a Pakistani company operating in Pakistan thus keeping the revenue in the country and its not based solely on apps.

CEO of Paxi, Zahid Sheikh, says that a large part of the population does not use smart phones and hence wouldn’t have access to apps. For this reason the company has decided to offer other alternatives to avail their services.

Besides an app, we’re also setting up a call centre, where customers can call and book a ride.

Zahid Sheikh also explained that this will work in ways slightly similar to that of other apps. The customers who do not have access to the apps can call the call center where the representative will create an account for the customer using the cell number they provide or the one they have called from. The customer will then be issued a 4-digit PIN which they will have to tell the driver of the taxi to start their ride.

Just texting their helpline will also work and a taxi will be sent to the desired location.

The cars and bikes operated by Paxi have banners and stickers on them to make them distinct and so they can be easily stopped on the road. The Pilots of these cars will be uniformed.

The full launch of these taxis will be on Pakistan Day, 23rd March, but for Women’s Day the company decided to launch one section of this service.

The Women-only section will have women driving the cars and will be solely for women. PAXI has decided to launch just 10 taxis right now (but expected to increase in number) that cater specifically to women. It is called the Pink Taxi.

Zahid Sheikh also said remarked, “If our women can fly planes, why not Paxi?” saying that women should get equal opportunities for everything.